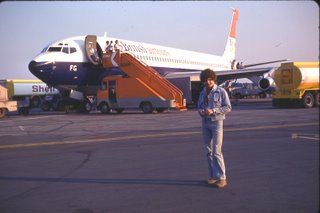 I'm excited 'cause I'm leaving,
I'm going away
To a new land over the sea
Where the places and the people and the culture are different,
And that's what's exciting me.
Posted by Neil McLeod at 9:24 PM

That is, by far, the hippest outfit I have ever seen you in.