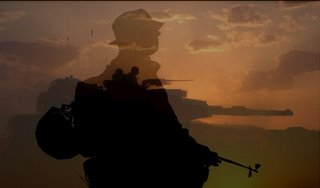 This slide show has been going the rounds, and I like it a lot. It reminded me of a Culmination Ceremony I attended when my daughter was singled out as the recipient of a special award. It was at Village Christian School, and the children had been asked to participate in a letter-of-encouragement writing campaign to the soldiers fighting to defend freedom in Iraq. We did not know at the time that our little girl had participated in the program, and when the announcement was made that a letter from a child at our school had been chosen as the most empathetic and grateful and well expressed, and that by acclaim from the soldiers overseas it had been selected, they had our attention. Then we were told that the author was now to come forward and read their letter.

Well when my daughter’s name was called out, I was overcome with emotion. I could hardly see my way to the stage to try to take a photograph, everything was a blur. When I finally got back to my seat the fellows in the row were holding out tissues to me so that I could dry my eyes.

Maran was presented with the Operation Iraqi Freedom Medal and an embroidered flag flown over Camp Spearhead in Kuwait. Here then is what she wrote:

Psalm 27:1-3 reads: "The Lord is my light and salvation-whom shall I fear? The Lord is the stronghold of my life-of whom shall I be afraid? When evil men advance against me to devour my flesh, when my enemies and my foes attack me, they will stumble and fall. Though an army besiege me, my heart will not fear, though war break out against me, even then I will be confident."

Kind soldiers, whoever you are, I thank you for your loyalty and bravery. I know I am just a kid, but I care and I thank you for your sacrifices and hurts, your respect for the freedom of our country, and I would like you to know that through all your toils and pains I will be praying for you.

Soldiers like you go through so many sadnesses and griefs. I know you don't have to do it, you don't have to see your friends die next to you, or drill in dangerously hot or cold weather from dawn till dusk. You soldiers are the ones who hold this country up, keep it strong, and make it brave. That position doesn't just deserve an "Oh thanks for being a soldier." No matter what rank you are, you deserve the utmost respect and encouragement. Dear soldiers, if you weren't where you are now, serving America, there might not be an America. Because of all the dangers you go through for this country without complaint and the respect you show towards all Americans, I give you my respect for every day you live and love America.

You give up holidays, joyous family reunions, tucking your children in at night, spending time with your spouse, and greatest of all, sometimes you give up your lives. Though you may go through troubled times, God will always be watching out for you, so no matter what the situation is, you don't need to worry. Dear soldiers in Kuwait, I want to give my personal thanks to you for your loyalty to our wonderful United States of America. 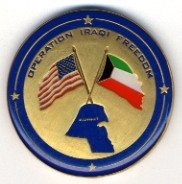 Reading the wonderful sentiment and heartfelt gratitude in your daughter's letter touched a place in my heart I'd long considered seared and dead.

As a survivor of the Viet Nam Campaign where we paid too high a price in lives thrown away by two-faced politicians and their willing accomplices in the press . . . her words of appreciation and, dare I say, love for my younger counterparts in-country . . . brought tears to my eyes and joy to my heart.

It is good that these young souls are being taught to appreciate the sacrifice military personnel, and their families, bear for the well-being of the remainder of our fellow citizens.

While she is a product of a private school and may not reflect the product of main-stream education . . . it's amazing how far a kind word and heartfelt emotion can go. It spans decades!