A tribute to Ann FitzGerald Skipper 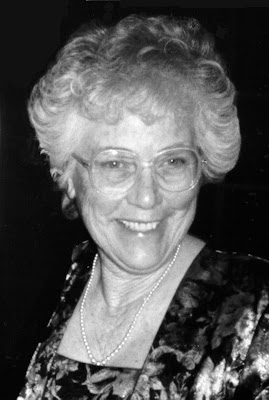 A tribute to Ann FitzGerald Skipper
1925 -2009
It is with great sorrow that I have to report of the demise of my dear friend Ann Skipper, who had been suffering from Alzheimer’s for some years and sustained a severe stroke late last December. She was eighty four and passed away on the 30th December. The humility and lack of fanfare typical of the family resulted in my not discovering the truth of it until now, June 2010.

Ann and I continued to gather dances related to the Clan and for the next 10 years worked on producing another book. As the dance teams were formed, Ann took over their coordination and became the Dance Mistress to the Clan MacLeod. In 1991 the “Ghillie Guide” was published, a small booklet with a wealth of information on the nuances of dance steps, figures and terminology needed to understand the many dances we were discovering. As dancing became popular at Clan ceilidhs Mrs. Skipper met the need for simple dances for these occasions and published “Clan MacLeod Dances For Ceilidhs” in 1993. A year later in 1994, “If the Ghille Fits…” was published, and together with“Dances of An Island Clan” it makes a unique repository of knowledge of Clan MacLeod dances and history.

It is not possible to begin to communicate the extent of the commitment and devotion Ann Skipper directed to her labors on behalf of Scottish Country Dancing, and especially to the Clan MacLeod. She was inspired in the Milligan tradition and was tireless in her work. Her academic research resulted in her readership at the Huntington Library here in San Marino, California. In 2000, as if to welcome the new Millennium, Ann published her crowning glory “Best Foot Forwards” a collection of twelve of her own dances each designed to emphasize a particular dance figure she wanted to teach. This little booklet alone represents an enormous amount of work, and places her in the ranks of the great Scottish Country Dance choreographers of the twentieth century, many of whom she new personally.

Ann stepped down as Dance Mistress to the Clan MacLeod in 2002, and in the letter to her from John MacLeod of MacLeod he wrote, “I must thank you very much for all the work you have done on the dance scene in clan MacLeod. You have been most successful in your role as teacher and enthuser and the clan is in your debt. I am sure that the heritage of dance will live on.”

Her four sons Tim, Andy, Brian and Paul, her husband Peter, the many grand children and a myriad of dancers around the world will mourn the loss of this “best of mothers and wonderful American lady” who is much loved.