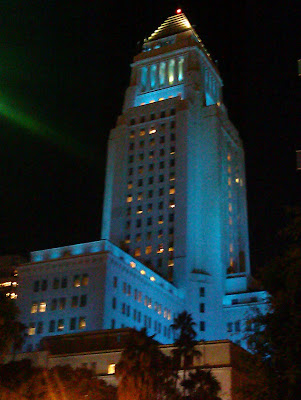 Los Angeles City Hall was lit up all blue on Thursday evening, and the Police Helicopters and news teams were flying around the top of the tower in salute of Blue September. Inside a small gathering was present in the Mayor Tom Bradley Hall to officially inaugurate this years observation of this outreach program to raise the public's awareness of the importance of taking precautions to catch prostate cancer early. 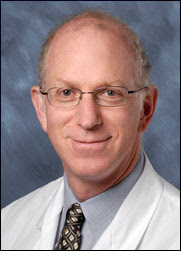 A band was playing and speeches were given. With New Zealand Consulate support Dr . Howard Sandler M.D., MS the Chair of Radiation Oncology at Cedars-Sinai Medical Center was introduced to discuss the new developments in treatment modalities and early detection and treatment of prostate cancer. 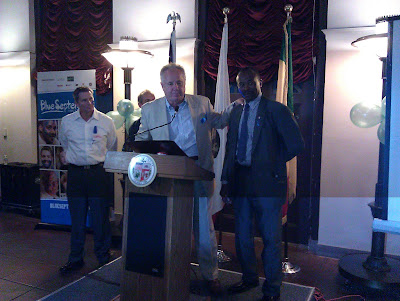 Councilman Tom La Bonge was introduced by his ever trusty assistant Isaac Burks. Tom was there to present an official proclamation from the Los Angeles City Council. These are always splendid documents. 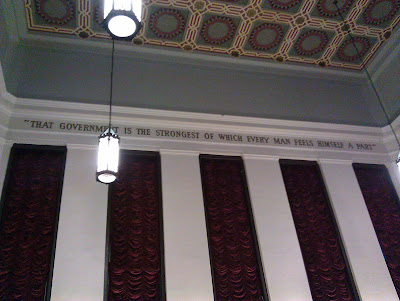 The building is a truly remarkable edifice which was completed in 1928, the architecture and the ornamentation is truly exquisite. Surrounding the top of the four sides of the hall is the following inscriptions starting with Thomas Jefferson's 1807 comment “That Government is strongest of which every man feels himself a part”. Also is to be seenon the other three sides, “With written laws the humblest in the state is sure of equal justice with the great”
“The City came into being to preserve life. It exists for the good life”
“No government demands so much from the citizens as democracy and gives so much back”. 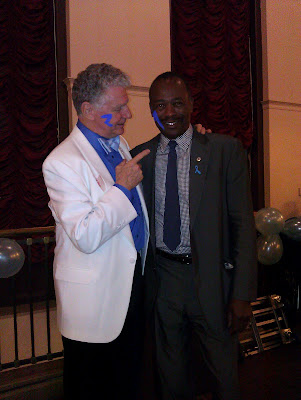 I wish that we all felt as positively about local government as these inscriptions suggest we might. 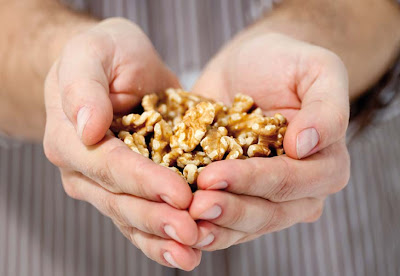 Email ThisBlogThis!Share to TwitterShare to FacebookShare to Pinterest
Labels: Prostate exam, Walnuts are good for you, walnuts stop prostate cancer