An Easter Poem - The triumphal Entry 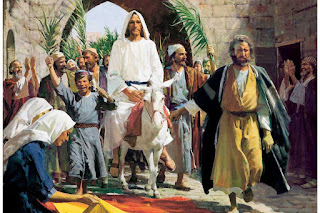 John 12 ,“Fear not, daughter of Zion; behold, your King is coming sitting on a donkey’s colt.”  Dr. William Varner who teaches at The master's University contends that it was on a Monday that the Lord entered into Jerusalem, not a Sunday

I keep a palm leaf in my bible

It’s folded and plaited and dry,

It reminds me of that fateful day

When the fickle crowd faltered and failed

To denials, in the court where they railed.

“Hosanna”, they called as He rode in

“Hosanna” they cried out with zeal,

“Blessed is He that comes in the name

Of the Lord, King of Israel”.

How quickly their attitude altered,

As the Pharisees looked on with scorn.

How deep and complete their denials

When the trials were done with the dawn.

The Pharisees saw as He rode in

On a donkey, the Scripture fulfilled,

And they plotted within their jealous hearts

How the Son of Man would be killed.

How sad Jesus was when He saw them,

For He knew every thought, every plan.

He could see how the crowd would reject Him,

And desert Him to a man.

I ask myself if I’d deny Him

Had I been in the crowd long ago.

For even Peter who loved Him,

Denied Him, three times in a row.

He rode through the crowds on a donkey,

He gave His life so that I might live

So I keep a palm leaf in my bible.

It’s folded and plaited and dry.

It reminds me that He died for me

That He came to atone for our sin,

And on the last day welcomed in.

A recording of this poem with music by James Covell is available on Spotify and iTunes
https://music.apple.com/us/album/when-the-spirit-moves/1411054434