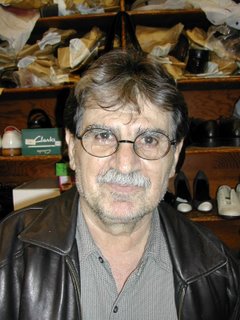 Ohannes (John) Makhdomian has been repairing my shoes for thirty years. He has a shop in the Farmers Market on Fairfax. He is famous now for doing a wonderful job at a fair price.


When my shoes need mending
I take them round to John
The cobbler in the market
For he can mend what’s wrong.
The shelves around his little stall
Are lined with paper bags
All waiting for their owners
And marked with paper tags.

I shake his hard-worn leathern grip
As he hands my shoes to me,
I know they are perfect - I don’t doubt,
As I ask him for his fee.
Then taking out each shoe,
I admire all that I inspect,
It’s not for need I pass the time
It’s done out of respect.

His eyes seem grey and sorrowful
They thinly veil his woe,
And when I ask he tells me
It all happened long ago.
It’s been eleven already
He’s getting out next year
My son, he got into a fight
And I’m left working here.

It was at a birthday party
When he was seventeen
But a boy lay bleeding, dying,
Before he quit the scene.
They had an altercation
My son put in his boot,
Then his friend drew a knife out
And stuck it in, the brute.

He wrote me saying the other day,
The chance to change he’d take
He said that he was sorry
That he’d made a big mistake.
So perhaps he’s learned his lesson
Perhaps it’s for the good,
I saw the tear so close to flood
And then I understood.

I understood the roughness
Of the stubble on his face,
And the disappointed sadness
When a father feels disgrace.
His teeth they all need mending
Like shoes all worn and torn.
His self esteem all cut away
His heart’s wrent and forlorn.

So when my shoes need mending
I take them round to John
The cobbler in the market
For he can mend what’s wrong.
I won’t take them elsewhere
His work is neat and good
For a bond has grown between us
And that is understood.

Beautiful. The people who linger in our lives make the biggest impression on our lives. Like my doctor, who has treated four generations of my family. My grandmother, mother, myself, and now my daughter. Excellent work.