The First Thanksgiving
An answer to Dr. Clement Moore - for my American family 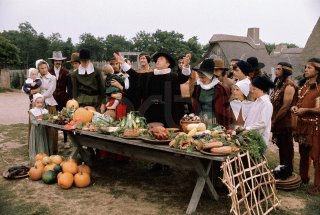 The first year was over, they'd settled the land.
Now Plymouth was home to a small Pilgrim band
The good ship "Mayflower" had long since sailed away,
As each one prepared for the Thanksgiving Day.
Governor Bradford had made his decree.
"All must make ready a festivity.
The Lord, in his mercy has smiled on our plight
Our harvest is good, and our cause it is right.
Through winter and sickness, for all these months past,
We've toiled and we've labored, 'til now at long last
There are crops in the pantry, and beer in the keg,
So each as we're able, make ready I beg."

Some men to the woods with musket and snare
For duck, goose and turkey, wild deer and hare.
Some to the long boats with hook, line and reel
For sea bass and cod or even an eel.
Some to the thickets, to bring extra wood
For each stove and fireplace in their neighborhood.
And some to fetch trimmings like corn cob and leaf
So each table is set with a cheery motif.
The womenfolk pounding make ready the grain
From the indian corn which they found when they came.
No butter was churning, no milk in the pail,
For they brought no cattle when first under sail,
But there was soup in the kettle and flagons of ale.
There was peeling and slicing and kneading and baking,
There was mincing and roasting with chopping and grating.
And sifting and searing, and spreading and smearing,
And wonderful dishes to eat kept appearing.
Then barrels upturned with planks on the tops
Made tables they covered with fine linen cloths.
All is made ready, the guests then appear,
Chief Massasoit with braves to the rear.
These were the natives whose help they derived.
And without their assistance none may have survived.
They gave them the corn which grew better than wheat.
And taught them that fish made crops tall and sweet.
After their chief, came a proud delegation
It seemed there advanced, the whole Wampanoag nation.
The Pilgrims, astonished, just welcomed them stay
And join in the feast they were sharing that day.

When all were seated at table and board,
Governor Bradford said, "Let's praise the Lord."
Doffing his hat and with eyes raised to heaven
He gave thanks to God for the blessings He'd given.
And barely had echoed the solemn "Amen",
When the village of Plymouth resounded again.
There was sniffing and smiling and clanging and clinking
And shouting and passing and eating and drinking
'Til everyone feasting was filled till replete,
And gave groans of approval for good things to eat.
Then after their meal there was smoking and toasting.
And singing and chanting and laughing and boasting.
And piping and drumming and dancing and reeling
And jigging and clapping, a wealth of good feeling.
In soothe, for three days there was nothing but cheer
As Christian and heathen* gave thanks for the year. *Indian

They crossed the Atlantic, they braved the wild seas,
Faced winter so harsh it brought them to their knees.
During this time half their number had perished,
But they never lost sight of the quest they all cherished.
Their harvest was taken, their laboring done,
In sixteen hundred and twenty one.

Since then every year, though the decades roll by,
As November days shorten with cloudy grey sky,
When Warblers and Martins have flown t’ward the ring,
And the fields lying fallow are waiting for spring.
It is then that we gather on Thanksgiving Day,
Surrounded by loved ones we bow heads and pray.
Remembering the Pilgrims whose struggle and toil
Won them Freedom and Justice on this foreign soil.
Our tables are laden with turkey and hams
Sweet corn and turnips, potatoes and yams.
Cranberry jelly and stuffing nearby
Freshly baked bread and of course pumpkin pie.
From ocean to ocean across this great land
From the shores of New England to the tall Redwood stand,
We pause to forgather with family and friend
And thank God for the goodness, may it never end?

* Indian may be sustituted for the word “heathen”, which is not supposed to imply barbarian just a non-Christian