A Kirkin' O' The Tartan 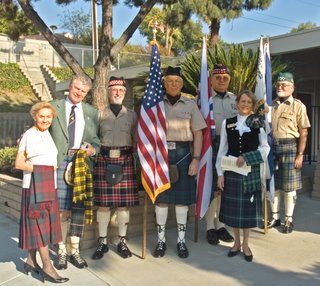 
Why do we do this?
Why did a small group of Saint Andrew Society of Southern California members get together in the sanctuary of St. Barnabas the Apostle Anglican Church to have Fr. Scott Kingsbury officiate over and bless our tartans. Well let me give you a few reasons as I explained to the congregation when I was acting as Tartan Master.

Tradition
For sixty five years American Scots have been taking their tartans to church to be blessed. It is an American tradition to hold this ceremony, and it has now spread around the world. It was established in 1941 by the then President of the Saint Andrew Society of Washington D.C., the Reverend Peter Marshall, Pastor of the New York Avenue Presbyterian Church, and later Chaplain of the Senate; The Kirkin’ O’ The Tartan was held at several different churches until 1952, then was settled at the National Cathedral. By now it is a tradition. Certainly since I started going to these services in 1976 I cannot remember a year when there was not a Kirkin’ somewhere in the southland. This is the first reason why we kirk the tartan, it is a tradition.

Hereditary Pride
Scottish folk have looked back longingly at the gems that fill out the sweet memories of the ancestral homeland. The little treasures like the piece of tartan hidden away in a family bible, or wrapped around a bairn to keep it warm against the ‘cauld blast’, or setting of the wedding dress. With it come the stories, the tales of home and the well remembered songs. Our fondness for and our pride in our heritage is another reason to celebrate the tartan.

Contrariness
Deep down in the heart of every Scot there is a resentment at being told that you must do or must not do something. It gets up our noses. Particularly if the command comes from someone we don’t respect. We have been told that we were forbidden to play the pipes, forbidden to ware the tartan, and forbidden speak our native tongue. We were even forbidden to bear arms. It therefore gives us particular delight to be able to parade our tartans in true style, especially when accompanied by the pipes and drums. It appeals to the contrary nature which I believe lies just beneath the surface within us all. If only for our Contrariness we Kirk the Tartan.

Patriotism
Celebrating our Scottish heritage is really a form of American Patriotism. Consider the contributions made by our countrymen to this American nation. Half the signers of the Declaration of Independence, more than half the Treasurers, and at least half of our presidents have been Scots or of Scottish decent; and that is just scratching the surface. We already know the Englishman’s nightmare is the constant confrontation with Scotland’s contribution to practically everything that is familiar that he uses in his day to day life. Much the same could be said of the multiplicity of the influence we as a group have had in America.

Since the early Colonial times, Scots, hard working and hard suffering, migrated to the Appalachians, invested in New Jersey, fought in the seven year French-Indian War, opened up the heartland, and felled the trees. They were doctors and teachers, trusted managers and accountants. They were governors, and cabinet members, lawyers and judges, prominent military leaders like Crockett and Grant, and inventors and scientists like Robert Fulton and John Muir and Alexander Graham Bell. They are the writers like Washinton Irving and Edgar Allen Poe and Herman Melville, they are the newspaper magnets who started The Boston News letter and the Chicago Tribune. They are the businessmen who invented meat packing, and the industrialists like the steel manufacturer Andrew Carnegie. They are the singers and the artists, designers of the cable cars. There are the Scottish Societies like the Burns Clubs and Clan Associations, and there are the ministers like Witherspoon who provided the framework for our constitution, and John Lloyd Ogilvey, Chaplain to the Senate who guided our nation’s leaders in prayer. It is out of patriotism that we gather today to sport our family colors.

Fun
Oh! and one more reason. It is fun to gather together, and bring these symbols of our heritage and present them to the maker of the Universe, and ask Him to bless us who wear these colors, and to keep His hand on our shoulders and guide us, and to provide for us as He sees fit
Jabez - 1 Chronicles 4:9-10.

A Toast to the Tartan

Here’s to the Tartan
The blue the green of it
The fighting sheen of it;
The yellow and red of it,
And every thread of it.
The fair have sighed for it,
The brave have died for it,
Foemen sought for it,
Heroes fought for it,
Honor the name of it,
Drink the fame of it.
The Tartan.

After Murdoch MacLean
Posted by Neil McLeod at 5:55 PM