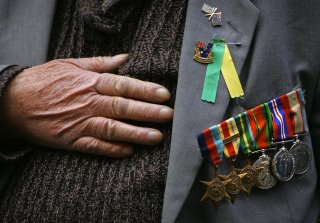 A Man Who Will Listen
A story from Ian MacLeod of Western Australia - He was approached while wearing his father’s battle medals by an old soldier at a parade for Veterans.

You look like a man who will listen
The old veteran stammered to me,
There’s something I really must tell you
For it has been bothering me.

It has been bothering me, mister,
Since that day on the Kokoda Trail
When we stumbled into this encampment
Where this Jappo was dying and pale.

I minded the booby traps round him,
With deft fear a crept in to find
The slice from the calf of his oppo,
He’d eaten, goin’ out of his mind.

It was tragic, that bastard was dying,
Yet I could not leave him alone,
For he’d tell that my troupe had been through there,
Then the whole Jappo Army’d have known.

So I put my gun up to his temple
I paused ’fore I let the shot go,
And that Jappo he smiled as if grateful,
And that’s what’s been botherin’ me so.

I see by the salad you’re wearing
Your heritage leads you to know
There are things that a man can not answer
That just go on botherin’ him so.

So I told him, “You did him a favour.”
“You spared him a death of regret.”
“For instead of dying a coward
You made him an honorable vet.”

Then the old soldier’s brow seemed less furrowed
His distant eye fixed firm on mine,
And he thanked me for lifting the worry
That had bothered him, such a long time.
Posted by Neil McLeod at 12:11 AM