So What’s An AED? 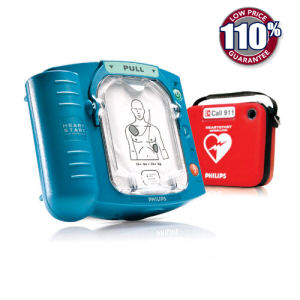 Well you better know it could save your life! Automated External Defibrillators are the next best thing to the paramedics getting there the moment your heart stops beating.

If you want the low down, a lot of people have a cardiac arrest episode at the end of their lives, and young or old, the national average life expectancy from such an episode is only 5%. Please don’t believe what you see on television I am giving you the facts. Before the defibrillator was invented, when the heart stopped so did you. But chances of survival went up following the introduction of CPR (Cardio-Pulmonary-Resuscitation), and leveled off in the 1980's and have only just recently got any better. The best place to have a heart attack right now is in an airport, or oddly enough in a Casino in Las Vegas. The pervasive availability of AED’s in these locations have upped the chance of survival (that means walking out of hospital) to about 70-80%.

So why the dramatic difference?

Cardiac arrest means your heart stops beating normally. It doesn’t mean your heart is dead or that your brain is dead, but it does mean that there is no pumping of blood round your body any more. Usually the heart muscle is contracting erratically in a fluttering manner. The blood carrying oxygen is what keeps us alive, and without blood, well actually without oxygen, your brain cells start to die in about three minutes. In about five to eight minutes without oxygen the heart muscle itself starts to die. After that even if the paramedics do get the heart started you will never know it!

So the critical factor is how efficiently you can massage the heart to keep some blood carrying oxygen flowing to the brain and to the heart muscle itself, and do you know how long you’ve got? About five to eight minutes! If you had ever tried to do CPR you’d know that in about three minutes you are plum tuckered out and even changing off with a partner just delays the inevitable arrival of the point where the heart muscle will not contract any more even if you stimulate it to do so. Rarely does CPR cause the heart to start beating normally again. It takes a shock.

That is where AED’s come in and why they are a life saver. While continuing CPR, you open the box you turn it on and you follow the clear directions which are spoken to you. You cannot shock someone who doesn’t need a heart start, because the devises have a computer inside that analyses the status of the subject. Only when necessary they allow a complete novice to administer a live saving jolt of electricity to the chest of a person who is already clinically dead, and if given soon enough can bring them back to life, and keep them alive until the telephone operators who are receiving your 911 call, and the paramedics who are fighting the traffic to get to your home or the park or the shopping center, can get you the help that is needed. They make a huge difference and there should be an AED in every home, office and work place, and possibly every car.

Click on the picture above to see the range of AED's available. They are all good!
Posted by Neil McLeod at 10:48 PM No comments: 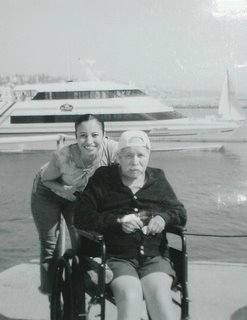 For Henrietta who wants her father to know how thankful she is to have had him in her life: for all the tough love shown to her and her sisters and his grandchildren. She always looked up to him for being a hard worker and for providing for his family. He was her father, her hero, her friend.

Papa can you hear me now? I’m praying that you do,
To hear me say “I love you still” now that the trials are through.
Oh! Papa I still hear you, tender in my mind,
Even in admonishment your tone was always kind.

Papa I remember how you would dance with me
I can see my sisters looking on so enviously,
You had me clutched within your arms and twirled me all around
I was flying with my Papa, with feet above the ground.

Papa I remember your strength that would not fail,
Yet when the call came telling you were gone I felt so frail.
I was numb and even now I can not tell just how I feel
But I know that you are gone and wish it wasn’t real.

Papa? do you remember when by the harbor quay
We’d be walking hand in hand, together you and me?
The waves were gently lapping and the birds mewed overhead
And I was with my hero, ’though those words were never said.

The fenders they were yawning as the boats rocked in the breeze
The halliards were clanking on the masts in a reprise,
Oh! we’d be eating ice cream and drinking in the view
And Mama would be with us and you’d call her Honey Dew.

Oh Papa! do you recall when I last pushed your wheel chair?
Through blinding tears with my eyes closed the vision is still there,
We went to the marina to see the boats a new
And Julius had an ice cream just like we used to do.

Papa, you’re my hero and so you’ll always be
And I will keep you in my heart for all eternity,
And time will never weaken nor take away one breath
For it’s love that binds, not reason, and that’s stronger than death.

Love and miss you
for ever
your daughter
Henrietta
Posted by Neil McLeod at 1:05 PM 1 comment:

The Pope And The Pickpocket 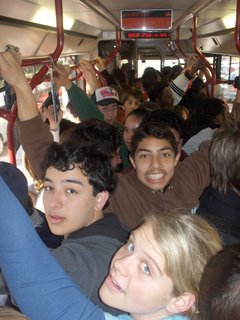 The fame of France and Italy is said to come in threes
For "Gallia est omnis divisa in partes tres"
And Rome of course is well renowned beneath the Corinthian frieze
For the Pope within the Vatican, the pickpockets and cheese.

Now Roderick, at fifteen, had gone off with his chums,
To see the Pope and taste the cheese and watch out for the bums.
They hoped to see the Bersaglieri running round a square
In a piazza with a fountain and the ancient buildings there.

On a Sunday morning after visiting the caves
In the catacombs where long have lain the early Christian graves
They braved a local public bus to reach Saint Peter’s Square
And hear the Holy Father say Mass and Sunday prayer.

Oh they weren’t riding on their own the bus was just jammed tight
There were tourists and pilgrims coming to see the sight,
And others riding with them who have traveled that way before
Who’d polished the nack of stealing while the tourist gape in awe.

Well that morning while in transit when a pouch he tried to pick
Roddy spied a pickpocket as he made his dip.
He didn’t get distracted, he watched the hand go in
And take his teacher’s camera out. He thought it was a sin!

"No." said Roddy "Stop that now." He wrestled with the man,
And tore the camera back again from right out of his hand.
The culprit made excuses, his looks were sour and dark,
He would wait till he was in the square to find an easier mark. 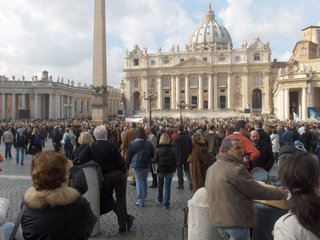 On reaching the Basilica the bus just emptied out
Like a stream of water from a horizontal water spout,
Folk fanned out on the cobbles to join the throng who hope
To receive the blessed sacrament from Benedict the Pope.

From the papal balcony he said Mass and then dispensed
A blessing on the pilgrims, and the thieves and all, and thence
Roddy and his school chums went south to see Pompeii,
And the pickpocket was left to try his luck another day.
Posted by Neil McLeod at 10:09 PM No comments: 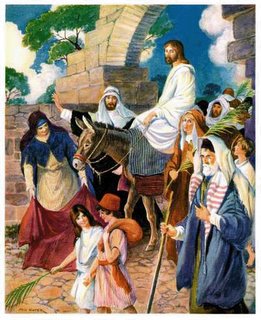 The Folded Palm
John 12 ,“Fear not, daughter of Zion; behold, your King is coming sitting on a donkey’s colt.”
For Nan MacNamara on Palm Sunday at the First Presbyterian Church of Hollywood

I keep a palm leaf in my bible
It’s folded and plaited and dry,
It reminds me of when the palm fronds waved
In profusion as Jesus rode by.
It reminds me of that fateful day
When the fickle crowd faltered and failed
Turning from frantic welcomes
To denials, in the court where they railed.

“Hosanna”, they called as He rode in
“Hosanna” they cried out with zeal,
“Blessed is He that comes in the name
Of the Lord, King of Israel”.
How quickly their attitude altered,
As the Pharisees looked on with scorn.
How deep and complete their denials
When the trials were done with the dawn.

The Pharisees saw as He rode in
On a donkey, the scripture fulfilled,
And they plotted within their jealous hearts
How the Son of Man would be killed.
How sad Jesus was when He saw them,
For He knew every thought, every plan.
He could see how the crowd would reject Him,
And desert Him to a man.

I ask myself if I’d deny Him
Had I been in the crowd long ago.
For even Peter who loved Him,
Denied Him, three times in a row.
He rode through the crowds on a donkey,
Anointed, the Pascal Lamb
He gave His life so that I might live
- Sinner that I am.

So I keep a palm leaf in my bible.
It’s folded and plaited and dry.
It reminds me of when the palm fronds waved
In profusion as Jesus rode by.
It reminds me that He died for me
That He came to atone for our sin,
So that my poor soul might be saved
And on the last day welcomed in.
Neil Stewart McLeod - March 2003