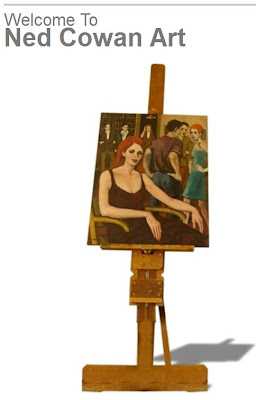 Once again I was captivated by the creativity of my colleague, and this time I surrendered to my impulse to share my observations and opinions with those who care to read my blogspot. For over three decades I have known the psychiatrist Ned Cowan, I mean the man has a small suite of rooms on the same floor where I have my dental practice. Our building has become a landmark, the Mani Brother's Sunset Medical Tower, and one cannot maintain a practice of any kind there unless some degree of accomplishment in one’s specialty has been acquired. In addition to the fifty three dentists who have practices in the building there are plastic surgeons, internists and dermatologists, an urgent care center, gynecologists and obstetricians. However, it is not the specialty of Psychiatry nor a medical matter that I want to discuss at this time, rather it is art. To be precise painting. 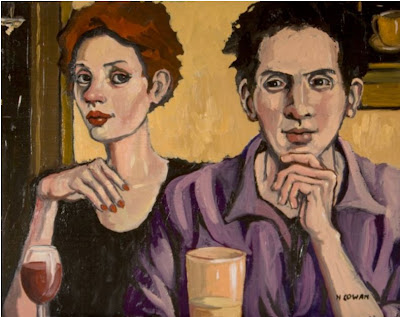 Doctor Cowan is a painter, not just a painter, but a gifted compositor of human emotion which bleeds through the canvases he paints. Over the years the irregular encounters and salutations as we pass in the hallway occasionally, and too infrequently, resulted in a dialogue which drew me into his inner sanctum where decorating the walls have always been a painting or two. They were his paintings, each of which had some story to tell which beaconed to me on some deep level like a voice crying out for attention from the confinement of the bastion of dried oil and pigment. 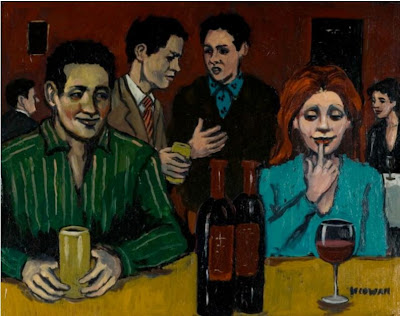 Cocktails
Today’s visit had me observing again images I had seen in the past but now there was a richer selection many more of his pieces which transformed his consultation room into the boutique wing of a private gallery. Something, clicked into place and now I share the results with you. Ned's bio says he “has been a practicing psychiatrist in Los Angeles for over 35 years. His love of art began as a child when he took classes at the Art Institute in Chicago. His two worlds, art and psychiatry, collide and collaborate forming a special relationship. This has resulted in his unique style of representational art that has been refined over the years. His influences stem from his medical training and a foreign fellowship in Tanganyika (Tanzania) where he was exposed to the art of his leper patients and their primitive yet deep perspective on life. Cowan was also influenced by his sponsoring bishop who was part of the anti-apartheid movement and close friends with both Bishop Desmond Tutu and Nelson Mandela.” How about that. Now they can hang in our memories too. It might just be my own projection, but I always see the underlying issue as I look at each piece trying to work out what is going on at the emotional level. Somehow the context of genius capturing some rare moment, some Woody Allenish expression of an idea that might otherwise be missed and which when exposed causes us to identify with it strongly, seems to pervade the images. I also see something of Degas in the way he captures the sorrowfulness of life's trials. 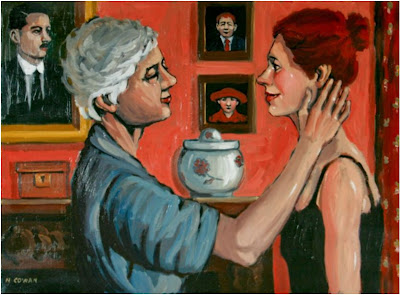