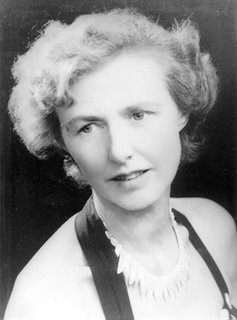 My father died some years ago now, and the initial grieving at his departure has mellowed into an irrationally rich tapestry of the sweet memories of what I like to remember most about him. His work first as a student at Merton in Oxford, and then as an undercover operative for the British Government in Kenya, meant that during the formative years of my life he was never at home. After them, the formative years I mean, he was never there anyway, for he left home when I was six.

It was my mother who raised us five children in an East African colony during the last days of British imperialism. She went to work, hacking away at a typewriter in the secretarial pool at the Government office “Supplies and Transport”. She was a nurse in the Red Cross, and an executive assistant to Kar Hartley the international game exporter. Later she worked on the research team of Dr. Guggisberg as he made headway on the Anaphalis mosquito and the malaria problem, and in the Tsetse fly as the vector for Sleeping sickness. She would come home tired and yet still made time to organize dinner and sing us to sleep.

In her songs Mum would remember the sweet times she had in her marriage. One haunting song written by her from the perspective of her children, suggests that we are comforting her as she laments.

Do not sigh or dream of that look in his eye.

The twitch of a smile and the touch of his hand,

It's a thing of the past Mother, we understand.

Lonely, lonely, in spirit we travel together,

Lonely, lonely, in spirit we're always with you.

Turn to me, your son with the curl on his brow,

His little kid-sister and big sister too,

Homing, homing, as birds of passage we travel,

Homing, homing, remember our home is with you.
Posted by Neil McLeod at 10:05 PM No comments: 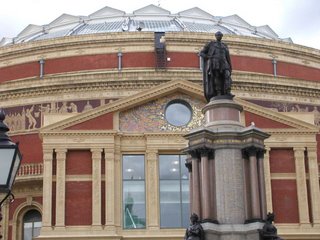 The Royal Albert Hall holds a particular significance for me, for it was there that the presentation of Graduates to Her Majesty the Queen Mother, Chancellor of London University took place in1972. Of particular note was not the fact that I got my degree, but that the whole recessional line was held up when the Queen Mum decided to stop and talk briefly to one of the proud parents. It was my dad.

How well I remember in Albert Hall
Where the Queen Mum gave me my degree
We were racked with our peers in the upper God’s
What a jolly good company.

Down on the floor were the special seats
For the dignitaries, dons and deans,
Professors and graduate fellows,
Some parents, and people of means.

At the end of one row, by the aisle
I could spy to my great surprise,
My father dressed up in his dufflecoat
And a twinkle in his eyes.

My years as a student were suddenly gone,
The lectures and tutoring through.
We were all of us off on another road,
Ready to try something new.

The anti-climax of being done
With no one out waiving a flag,
No one to slap you on your back
A hollowness made the days drag

And then there came this antidote,
The graduate presentation.
We were decked with our gowns and caps
And filled with expectation.

Each had a colored satin hood
And a tasseled mortar board,
And those who had earned distinctions
Had stripes on their gown-sleeves broad.

The orchestra started playing
Elgar’s march made our pulses rage
When the Queen Mum and her entourage
Processed up to the stage.

How thrilled we were as she gave her speech,
We listened, spellbound, enthralled.
She told us all how proud she was,
“Britain’s best” is what she extolled.

We each in our turn filed down in a line,
To cross the stage, bow and receive,
From the University Chancellor
A smile and a paper decree.

Having returned to the balcony,
The ceremony all but complete
Watching the formal recessional,
I nearly fell off my seat.

The whole parade was arrested
The Queen Mother had stopped in the aisle
And the person whom she was talking to
Was my father beaming a smile.

He was nodding his head in agreement
He put his hand up to his chest,
I imagined that he was saying,
“You pinned it right here on my vest.”

How well we remember the Albert Hall
Where I went to receive my degree,
My veteran father saw it all,
And he got to speak to the queen.
Posted by Neil McLeod at 6:26 AM No comments: 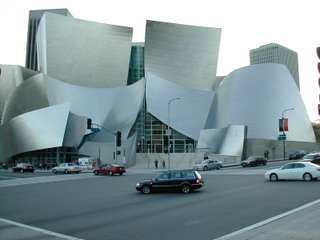 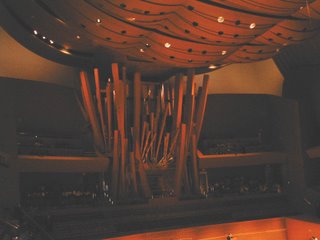 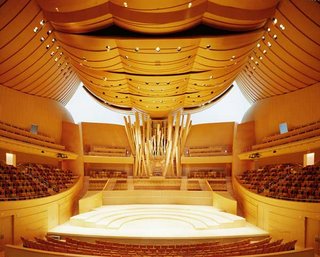 I guess want I wanted to say is that although we were cramped, and I can’t figure out why Frank O. Gehry would let his fine work be so abused by pecuniary meanness, the hall is exquisite, and the sound is marvelous. It is quite a Los Angeles achievement, unlike the Getty, which looks like a cheap condo lot on the top of the hill.
Posted by Neil McLeod at 8:13 PM No comments: