The Ramming of the Royal Yacht Britannia 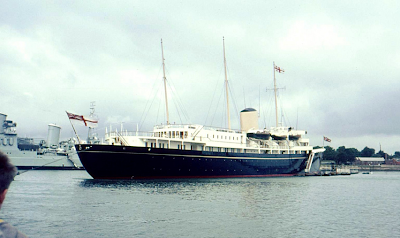 The Royal Yacht Britannia at anchor in Portsmouth Naval Dockyard in the summer of 1963. This photo was taken from a tourist boat which did trips around the harbour.

A true story about a boating accident during a Sea Cadet Training Course in Portsmouth. It was August in 1962, all the cadets got their Whaling License but mine was only Second Class, and here is the reason why!

There’s football, golf and hawking
But when it comes to sporting
He’d rather spend time messin’ in a boat.
At sea, on lake or river
In a yacht or something bigger,
Or just a dinghy that would get his vote.

No matter what you sail,
Rules of the Road prevail,
If your vessel is a dinghy or quite large.
For you never should collide
Or scrape you’re vessel’s side
Especially if your near the Royal Barge.

Now Neil learned these lessons well
As a cadet, so when he’d tell
This tale, he’d feel it was with some remorse.
He was stationed there in Pompey
On the “Sheffield” by the long quay,
To take the Southern Area Boat-Work Course.

They had risen every day,
Exercised the Navy way,
Then they trained to take a Whaler on the foam.
And the course was going well
At this rate he could tell
He was going to make the C.O. proud back home.

Now the harbor pool was wide
With great grey ships on every side,
And in the center all alone their Navy’s joy,
Hard-shined and deep dark blue,
Looking grand from every view,
Rode the Royal Yacht Britannia at a buoy.

The new C.O. was no dud,
Lieutenant Commander Blood,
Who by all accounts was gifted at his prose.
He could swear each other word,
And expletivise each verb
Not repeating till the smoke came out his nose.

Now, one morning on a spree
They had pushed off from the quay,
Stowed the boat-hook and were trimming up the sails.
They were polishing the knack
As they turned about to tack,
Of drawing up the mainsail with the brails.

With their whaler under weigh,
We were beating ‘cross the bay,
Where Britannia’s shackled anchor chain was moored.
The cable made an ark,
And they thought that for a lark
They’d sail beneath it as their spirits soared.

They could see the fit was tight
But if they got it right,
At full tilt the mast would list well to the port.
And they sailed right underneath it
Went about, and to repeat it,
Were gathering speed to make it, so they thought.

But the wind was at their stern,
It was a lesson hard to learn,
And letting draw the brails they made a jibe,
As the sails filled out they lunged,
And to starboard their boat plunged,
And clipped their stern against the great ship’s side.

Neil had a dreadful hunch
As he heard the awful crunch,
As they wacked up on the hard-shine of her bow.
He knew that they were for it,
In a mo’ the C.O. saw it,
A ghastly great white gash beneath her prow.

The boatswain’s pipe peeled out
Then he heard the C.O.’s shout,
Through the megaphone come trembling on the breeze,
Able Seaman Mac
You bring that whaler back,
And in his veins the blood began to freeze.

At the quay-side with boat trim,
The C.O. looked at him,
Amazingly he seemed lost for a word.
“Get that boat out the water
Report back to your quarters.”
Was all the admonition that he heard.

Oh yes he was in trouble,
He responded at the double,
And ran round to the cruiser ‘cross the bay
And below the decks he stayed
And in his mess he prayed
For mercy the remainder of the day.

With his mess mates back to port.
They thought they’d make it sport
To ride him on the trouble he was in,
And it only made it worse
That the C.O. didn’t curse
As he stood there on the quay addressing him.

In the galley hall that night
It was a source great delight
To watch Neil when Defaulters were announced,
But what caught their attention
Was the fact there was no mention
And their expected source of fun was truly trounced.

Next morning at first light,
When the boatswain Colors piped
They peered out the port to where Britannia lay,
But a work crew in the night
Must have painted out the white
And not a mark was on her bow to their dismay.

After breakfast with his mates
All dressed in Number Eights
They fell in for orders on the quarter deck
There instruction were quite clear
No cadet was to go near
Britannia, and they stared at Neil’s neck.

Now when the course was done,
On the train home just for fun,
They all discussed the outcome of this farce.
But although he got his ticket,
He found he’d missed his wicket,
It said “Able Seaman - Whaler 2nd Class” 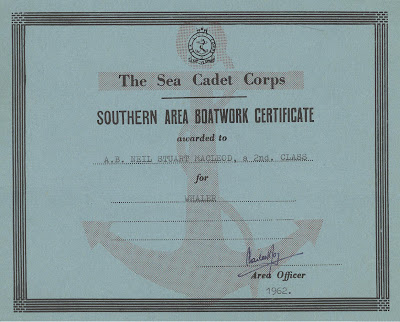