The First Voice for Our Lady of Seven Sorrows 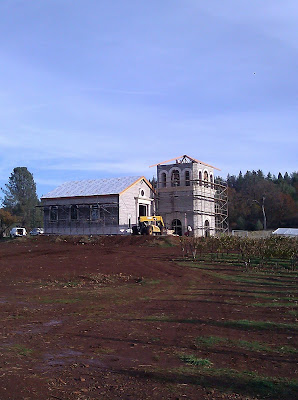 The first prayer for Our Lady of Seven Sorrows, in the oratory at Seven Hills Ranch, was offered up on November 26th 2011 and took the form of two hymns in plainchant, the Ave Maria, and the Salve Regina. The builders and ranch masters halted as time stopped to memorialize the initial sanctification of the new chapel.


There’s a spot in the Valley of Inwood
That is called The Seven Hills Ranch,
Where the hillsides are high cloaked with vineyards
To which I’d return at the chance.
From a crest looking down on the valley
A sanctuary tower may be seen
Dedicated to Sancta Maria,
Stabat Mater of Heaven the Queen.

I sent up a prayer for Our Lady
For Mary the Mother of God,
I sent up a prayer and the hills were still
Like the builders who stopped where they trod.
And the hymn that I sang was as old as the hills
And it rose to the new chapel’s dome,
Filling the air with a hope and a prayer
In a space that will ever be home.

Never before had a song been sung
Never a voice offered up,
Not since the chapel was first conceived
As the venue to raise host and cup.
And the song was the sanctification
It flew to the beams like a dart
And those who were there will remember the prayer
For Our Lady engraved on their heart.

And the valley of Inwood will blossom
Its hillsides will bloom and be fair,
The wines from its vines will fill up the cup
When communion is taken there.
And bells of Our Lady of Sorrows
Will peel out the Angelus Change,
Across the vineyards and out and away
To all seven hills within range. 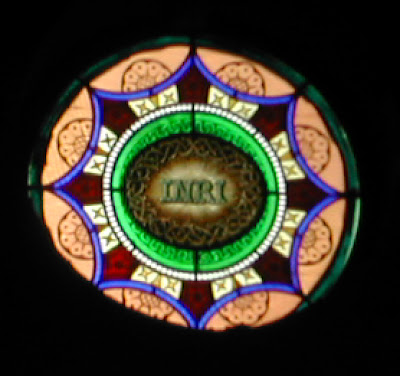 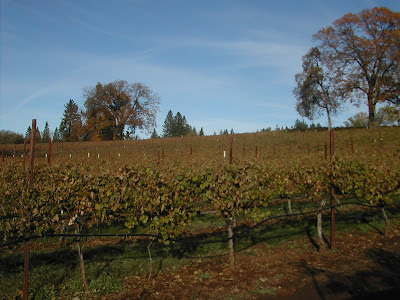 A Visit To Anselmo Vineyards 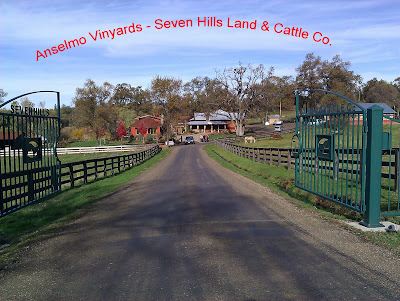 On the Saturday after Thanksgiving we went with Ray and Charlotte Carlson and Jenny Fator to have lunch at a vineyard restaurant. What a delightful surprise that turned out to be. Set to the east of Redding in the Inwood Valley this 2250 acre ranch lies at the feet of Mount Lassen. The term gorgeous comes to mind. 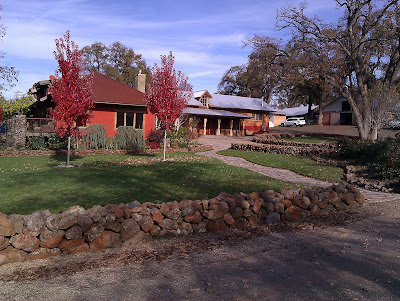 The facilities are absolutely beautiful with large and small intimate dining rooms, and a wedding pavilion down by 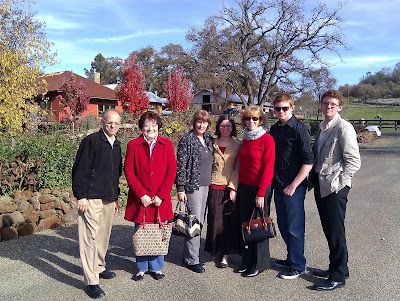 
Miss Maddie Merritt was with us between Jenny and Nancy, and Charlotte and Ray to the left and our boys Ollie and Roddy to the right. 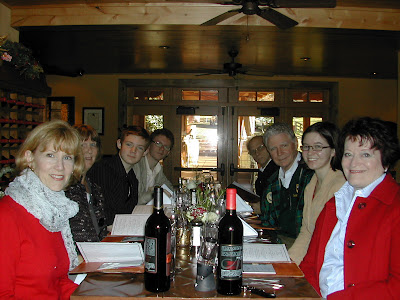 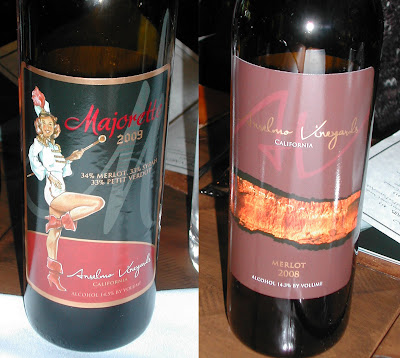 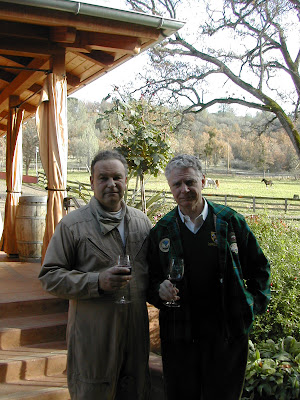 Then the real magic started to happen. We were introduced to the vineyard owners who have been industriously enhancing and updating the facilities, Reverge and Ramone (Chicken) Anselmo. What fascinating folk they are.

Reverge, low key understated and armed with a Winston between his fingers and a glass of wine and ice, army jump suite clad and warmly inveigling his visitors into his charm. He opens up quickly and easily to divulge how his Wedding Pavilion is drawing in the visitors. Every vista is captivating. 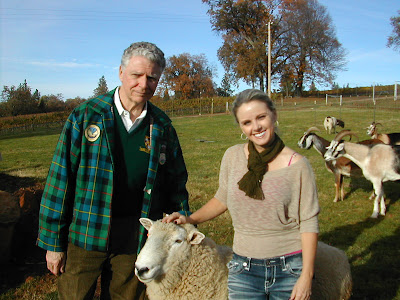 "Chicken" is just about as at home in the barn yard as she is at the salon table, and is captivatingly enthusiastic about the improvements that are underway all around her. The animals love her. She embraces the traditions of the ranch and pointed out the grave in the vineyard of its founder Sylvester Langdon who was killed in 1857 by grizzly bears on the property. 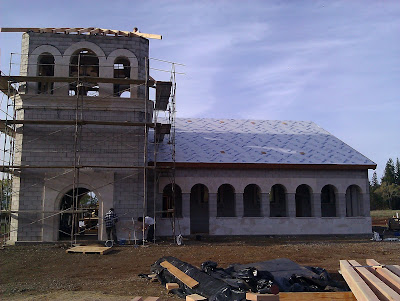 Up on the hill overlooking the cluster of tasting rooms and barns there is a new Catholic sanctuary in construction with artisans and materials from Italy. It is to be consecrated as Our Lady of the Seven Sorrows for the ranch of the Seven Hills.

Carillon is installed in the tower to ring out the Angelus, and resonate throughout the little valley. No doubt the church will be the venue for many a wedding in years to come.

The acoustics were sampled with long remembered renditions of the "Ave Maria" and "Salve Regina" in plainchant.

There is to be a New Year's celebration at the vineyard, and we are hoping to attend.

The new pavilion is stunning 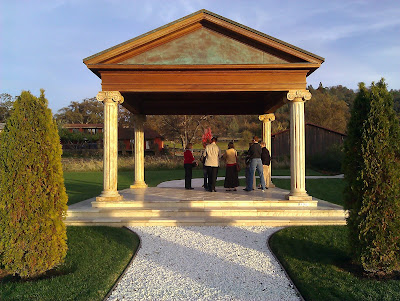 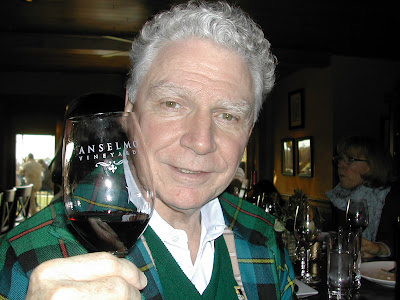 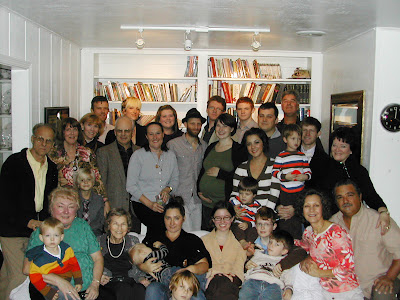 Well here we all are at the Carlson's in Palo Cedro, to the west of Redding, and what a jolly company we were. I am on the end of the camera obviously. I could not find a tripod this year.

It is delightful to see the young families growing, a foreshadowing of things to come for us McLeod we hope.

Thanksgiving is a great American holiday, a chance to reflect of the many blessings we do not deserve, but yet enjoy so completely.
Posted by Neil McLeod at 11:23 AM No comments: 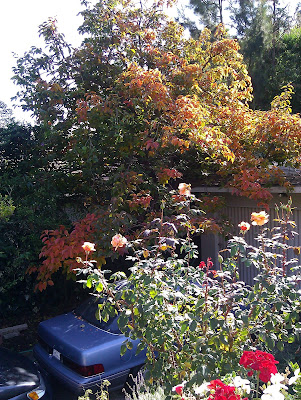 With the Persimmon tree turning to red and gold, our gardener has chosen to fertilize the lawns in time for the rains. The birds are now madly attracted to our patch of grass and flock to glean their share of the newly planted seed. Should I approach to snap a picture they fly off to the adjacent bushes and pretend not to be near, eying me watchfully to ensure that I am completely gone before venturing back and starting their chorus again.

That old Flamingo is left over from our daughter's Alice in Wonderland 18th Birthday Party. It is getting sorry and faded now the last of a stand that pervaded the grounds on that momentous occasion. 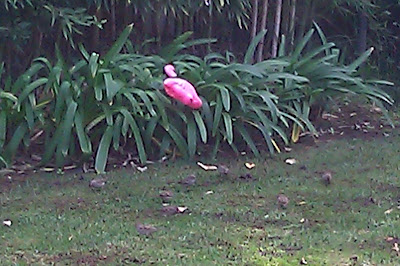 I don’t begrudge those birdies on the lawn
Scarfing up the seed the gardener’s sown,
They make me think of Rabbie’s little mouse
Uprooted from his house inside the loam.

What we intend to beautify our home
They flock to steal in such a merry throng,
Caring not to sow or reap or store
But fill the garden air with chirping song.

Should I approach to see they flee away,
Or tap the glass beside my window seat
The doves rise up and mournfully complain
That I should stop their “gleaning of the wheat”

Surmise I then that I am but the slave
That serves the Master who all things provides
Who feeds the birds and decks the lily fair
And gently my possessive nature chides.

I’m set to wonder was it not the birds
Who gathered in the seeds so widely strewn?
Then shed them so they grew for us to find
Not far away from places we called home.

Look at the birds of the air; they do not sow or reap or store away in barns, and yet your heavenly Father feeds them. Are you not much more valuable than they?
Matthew 6:26

So Ruth stayed close to the servant girls of Boaz to glean until the barley and wheat harvests were finished. And she lived with her mother-in-law
Ruth 2:23
Posted by Neil McLeod at 1:33 PM No comments: