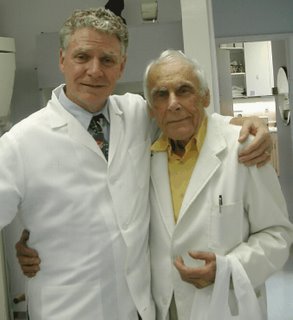 I’d really like to say something about our old friend, Bill,
Who latterly had answered to the sobriquet of “Will”.1
I’ve known him nearly half my life, twenty years at least,
Since the days when he was spry and wore his suite well creased.
I would pass him smiling, grey haired and eminent, in the hall
A man loved by his students and his patients and by all.
And he would crack a beam at me and with a wave say fawning,
“Why don’t you take an aspirin and then call me in the morning.”

One lunch time he regaled me, his face a brace of smiles,
Of the morn when newly qualified and attached to the Argyles,2
His batman drawing a smart one, whose boots shone like molten tar,
Said “Sir! The C.O.’s compliments, he wants to see you in the bar.”
“The Bar?” said Bill, astonished “the clock has not turned ten”,
“Do you mean to say he’s there already drinking with his men.”
“Aye Sir!” he said quickly, “That’s the message that was sent.
You’ll find him ’cross the p’rade ground, inside that greet big tent.”

Bill pulled himself together and straightening up his tie,
Said “Thank you Corporal. That will be all. I’ll see you by and by.”
Then our Navy Lieutenant3 stepped out to choose his course,
The parade ground was enormous it took five minutes to cross.
By the time he got to t’uther side he was puffed and red of face
But he braced himself for action as he approached the place.
And then between the guy ropes he saw as he raised the flap
The bar ...with every drink you’d want, even beer on tap.

“Ah Doctor! Good to see you. You will have a drink?”
Said his new commanding officer, at which Bill paused to think.
He glanced, and all about him, this salad chested throng
Were clinking slantés4, before noon, at a bar ‘a mile long’.
The entire mess was getting legless in that vast tented hall,
“It’s hard to fathom how the Army got things done at all.”
His comprehension floundered as this scene he surveyed
“I don’t know how they do it,” he said, “with two drinks I’d be flayed.”

Now many years have come and gone since that time we recall,
Bill was married, had a family, ran a practice, did it all.
And in his setting years he did not let it fade away,
He kept himself together, fit and active every day.
’Till one day on the tennis court his ticker gave a jolt,
It couldn’t take the strain, it wasn’t anybody’s fault.
They put him on some pills and then he fell and broke his leg
The trouble was he had to spend a lot of time in bed.

The last time that I saw Bill, I’d come round to clean his teeth
As he lay thinned and failing on the med-bed neath the sheet.
His front room had been converted to be his private ward,
And a nurse was there attending the man we all adored.
And when the brushing and rinsing was over, which he hated
To find respite for him now that this torment had abated,
I recounted my memory of this story for a while
And was rewarded for my effort by the breaking of a smile.

In that moment all the trauma and the hardship seemed to fade
For an instant he was there once more standing on parade.
For a moment it felt as if a burden had been lifted
With that smile the feeling in the room for all of us had shifted
It was his last, for I am sure that he didn’t smile again
Never cracked those well worn teeth the way we knew back-when
It was his last! But I shall keep it in my treasure box at home,
A memory of one of the finest men I’ve ever known.

1. Will as in “Will” Shakespeare whose Globe Theater was rebuild by Sam Wanamaker, Bill’s brother
2. The Argyle and Sutherland Highlanders - A Scottish Regiment
3. Recently qualified and newly commissioned in the Navy
4. slantés, - plural, slanté vah good health - Gaelic
Posted by Neil McLeod at 7:35 PM No comments: 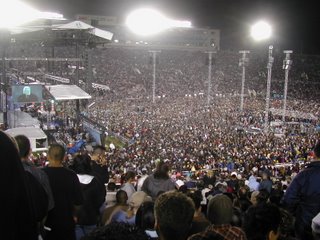 Every now and then, the fervor of the ‘born again’ gets up my nose. I believe I am actually jealous of the acuity with which they can trot out the exact time and date when they were saved, the moment they met Jesus. They have had a spiritually transforming experience which has changed the course and the meaning of their lives. I can not say that!

It is not that I am non-believer, I have always been a believer, some times not a very good one. I just do not know when exactly, in the years between three and six, the effect of a Catholic upbringing took seed. Whether it was it the teaching of the Lutheran missionaries in Koru or the nuns in Nairobi I can not recall. It just all made sense by the time I made my first confession and received my first Holy Communion at the age of seven.

In 2004 we participated in the Billy Graham Crusade here in California. It was held at the Rose Bowl, that huge stadium in Pasadena. When the time came to make the altar call, thousands, I mean thousands, went down to receive the Lord and accept Christ. The whole field was covered with new Christians and those greeting them. Each one of the recipients will remember the time and date. I had already received Christ years ago, I was confirmed at fourteen, I stayed in the bleachers with my Christian buddies and watched enviously as hoards of others made that new commitment.

Yet upon reflection my walk was strengthened that day, just as it was this weekend in Forest Home when with my family I returned to the San Bernardino mountain retreat where Billy Graham preached so many years ago. This time we heard the Reverend Mark D. Roberts who led us in an intensive on the Psalms.

So what is the point now that you have got this far? Wherever you are in your spiritual walk, I feel confident that like me you will be strengthened by reading and trying to get the feel for the Psalms. Even the longest ones can be read in a few minutes and there is such a lot of inspirational truth in them. Mark D. Roberts has a new web presence called The Daily Psalm and I recommend it. You’re already sitting in front of the computer; this a great way to start each day with time-tested spiritual inspiration. It can really stop the “born again” from getting up your nose!
Posted by Neil McLeod at 10:37 PM No comments: