"The Thorn With Me" a tenth book of poems 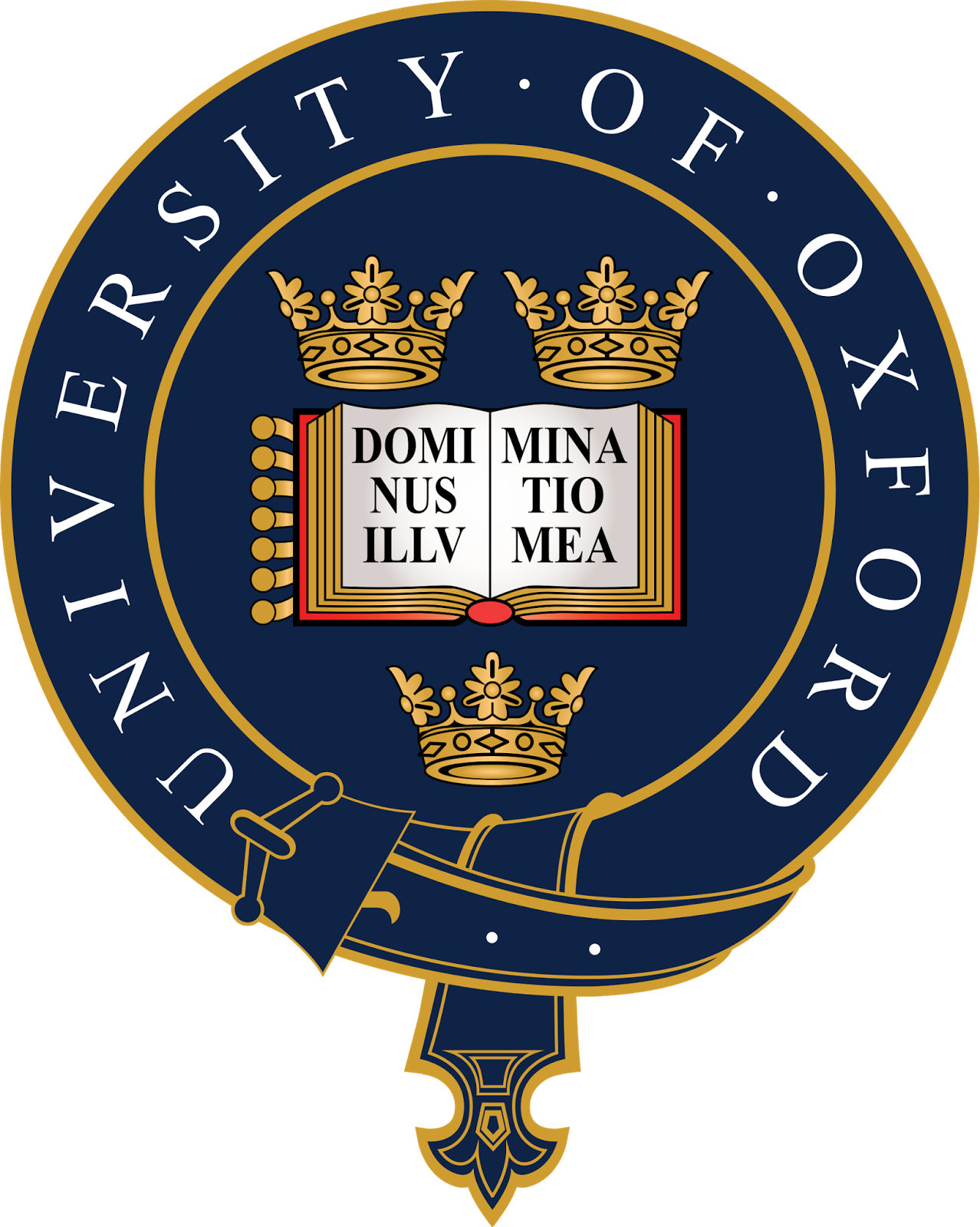 Here, at last, is my tenth book of poems with an introduction by Oxford Professor Theo Maarten van Lint. 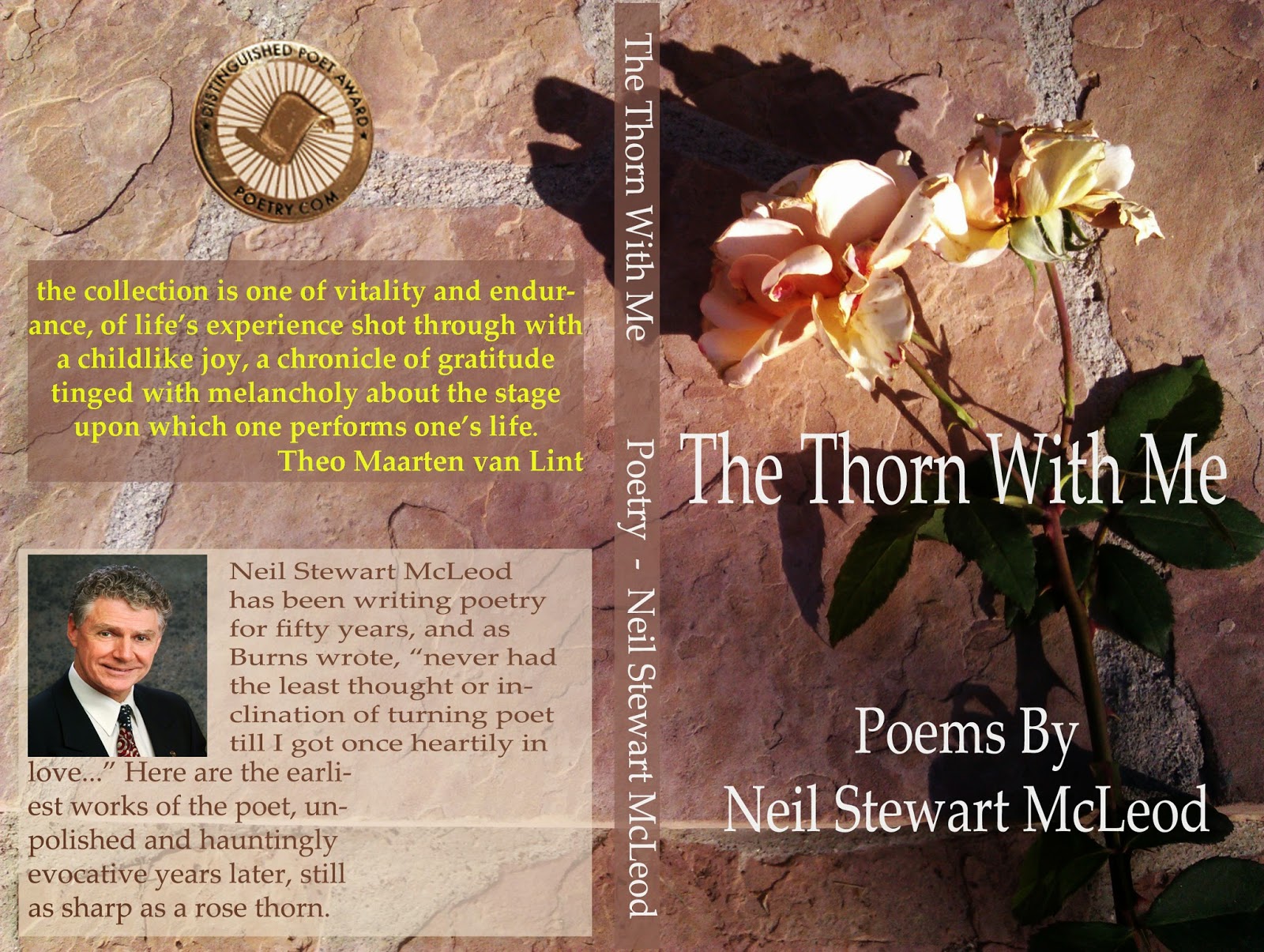 Here are the earliest poems I ever wrote and also some of the newest.  Reservations about their suitability and immaturity of the former have always dogged a willingness to share them.  However, at the end of producing a series of volumes of poetry, “Dawning Oxford” and “Timeless Oxford” needed somewhere to go.  They are from those student days when we spend time sorting out our priorities, working late, and reflecting on what lies ahead. In “The Going” consideration of leaving cheap digs in London provided the canvas for melancholy reminiscence.  Then there are the fanciful love poems like so many poured forth on poetry.com everyday. Finally, “The View” and “The Open Fire” are the most recent and give some dimension to the collection. They are available on Amazon.

The title, “The Thorn With Me” obviously come from Burns “Ye Banks and Braes” or more correctly “The Banks of Doon”.  These reflections all have a lingering sting.  They can not be remembered without sensing again the twinge of emotion and even embarrassment.  Yet here they are heart aches and all.

The Thorn With Me takes the reader to Oxford and London, through poems written in the poet’s student days in the late sixties and early seventies, next to much more recent places and material, looking back, revisiting, reliving, and revising. The occasions are precise, the feelings retain a poignancy in memory that bridges time and convey a strong sense of place.
The tone of the poems is often parlando, with laconic rhyme, elsewhere events are carried on a song’s rhythm, while the vocabulary mixes accessible parlance with archaisms, fusing into the poet’s specific voice. There is a lightness to life that springs not from superficiality, but from resilience and a sense of humour based in what seems a matter-of-fact acceptation in advance of the bumpiness of the ride. The title goes some way to explain the attitude. Yet, one wonders about the strength of the sting the thorn causes. The hurt is present, but muted by the power that looking back and weaving memory into the tissue of today’s emotions affords. Stung, wounded, a thorn in the flesh, whether for love lost or the social indifference of urban developers pushing for a modern Babylon; Neil McLeod takes stock in epic vignettes, rather than in soul bearing lyric. Yet, tenderness and vulnerability are given voice in the present for a sister and the gift of a child. The aspect of a tale of years gone by, of a book of memory, an album, is reinforced not only by the photos and drawings adduced in embedding the poems in the realia and personalia of their time of creation, but also in the brief introductions and comments that accompany many of the poems.
A lingering impression of the collection is one of vitality and endurance, of life’s experience shot through with a childlike joy, a chronicle of gratitude tinged with melancholy about the stage upon which one performs one’s life.

Posted by Neil McLeod at 6:26 AM No comments: 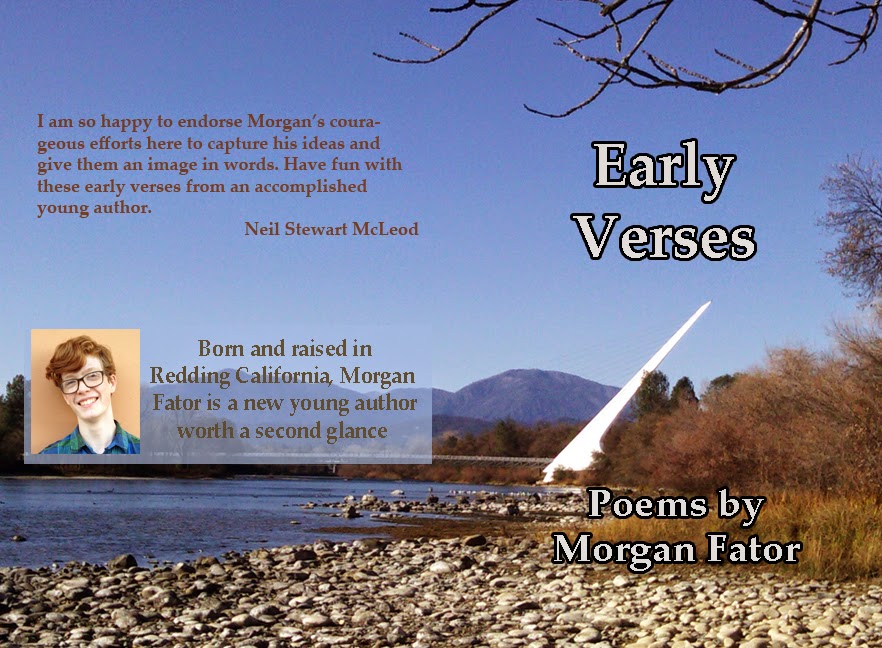 Today my great nephew Morgan Fator's first book of poems was published and is available on line from Amazon.  Why not take a look?

In my introduction I wrote:  Much verse is written, but not a lot of it is poetry. Just visit Poetry.com or any online forum and you will soon be agreeing with me. When the creative effort is fruitful it should be encouraged, and for this reason I am so happy to endorse Morgan’s courageous efforts here to capture his ideas and give them an image in words.

Years of home schooling under the watchful eye of his teacher, Charlotte Carlson, combined with the generous spirited love of his parents and friends have tempered the creative spirit of this imaginative young man.

Have fun with these early verses. One can only look forward with anticipation for his future efforts