It was a chilly evening, we were gathered round the fire,
A company of neighbors that we love and admire.
Each were telling stories they eyed me and said “Roi,
Tell us all a good one of when you were just a boy.”

I adjusted my kufiya*, eased forward on the seat,
Arranged the collar of my robe so it was straight and neat.
Then taking one sip from my bowl while thinking out my plan,
I looked around and eyed them back and softly I began.

“I’ve been a shepherd all my life I know these hillsides well,
And now well over seventy I have a tale to tell.
One night like this when I was just  lad of seven years old
My expecting mother said ‘Get your coat, it’s already turning cold.’

“Tonight you’re going with the men to keep watch o’er the flock.
We have visitors staying with us, hark I hear their knock.
They’ve all come to be counted Augustus has said so,
The place is packed, I had to let that other couple go.’

“So I went with my father and my uncle to the hills,
The air was clear and we could see our small town in the rills.
It seemed to be just nestled there so silent and so still
And here and there a spark of light came flashing up the hill.

It was really beautiful as we gazed there alone
Watching quietly by the sheep so they wouldn’t roam.
But that night something happened that we’d never seen before,
So sit back now my brothers and I’ll tell you what we saw.

The wind came moaning through the trees it whistled and it sang
Like a chorus at the temple when the sacrifice began.
The rushing clouds before us transformed to an angel winging,
And this the message that it gave came to us through the singing.

‘Fear not for I bring to you good news for all mankind,
A Savior is given today and this shall be the sign.
In Bethlehem, town of David in a manger all forlorn
All wrapped up in swaddling clothes the baby has been born.’

And there was with that angel a marvelous heavenly throng
And this the message I recall that echoed through their song,
‘Glory be to God on high and peace to men on earth
Who have His favor, for today it is the Savior’s birth.’

“Then we went running down the hill as fast as we could go.
I had a lamb around my shoulder bumping to and fro.
There at the outskirts of our town in a stable bare and small
We found the blessed baby Jesus lying in a stall.

He wasn’t sad or crying he made no alarming sound,
His mother Mary smiled at him, with Joseph looking down.
All the cattle were watching, it was holy they could tell.
We gathered round him on the straw, and on our knees we fell.

“We left there telling everyone what we had seen that night,
Spreading it through Bethlehem with the morning light.
And when I told my mother she remembered with a swoon,
That they were the same couple for whom she hadn’t room.

“The little town was humming but you know it wasn’t long
Before the census was all over, and the visitors were gone.
All except the Holy Family they’re the ones who stayed,
And we watched carefully over them and for their safety prayed.

“Now in the weeks that followed my own mother came to term
And I soon had a tiny baby brother of my own.
One night we had more visitors who came from somewhere far,
They said they found their way to us by following a star.

“When we looked in the sky above we saw that it was true
There was a bright star with a tail shining in the view.
Those visitors came bearing gifts for “The New Born Babe”
Dejectedly my mother explained the big mistake they’d made.

She said, ‘You’ve got the wrong house you want the Messiah,
They’re staying at the cottage by the farm, a little higher.’
Before they left to follow on something strange they told,
“Don’t tell any one again, do not tell a soul.”

We did not realize at that time how our lives would be changing
That with the prophecy fulfilled the world was rearranging.
Soon more visitors appeared in ranks row on row
They were looking for Jesus demanding “Do you know?”

I lost my baby brother and my mother on that day
Soldiers, at King Herod’s behest, marched in to our dismay.
My mother tried resisting she covered the baby she adored,
But they just thrust them to the ground and stabbed them with a sword.”

I’ve been a shepherd all my life I know these hillsides well,
And now well over seventy I have a tale to tell.
I saw my Savior at his birth I knew when he had died
The sky went black and hid the sun, earth trembled far and wide.

But let me tell the good news, He rose and went to heaven,
And I have known the truth of Him since I was only seven.
He is waiting there for us beside His Father’s throne
And if we just but follow Him, He’ll claim us as His own.”


*Kufiya - a head dress worn by shepherds in the middle east

Email ThisBlogThis!Share to TwitterShare to FacebookShare to Pinterest
Labels: A Christmas Story, A shepherd's Christmas. Christmas Poem, the wrong house

Bringing The Clan Back To Dunvegan

My most recent publication is a book for adults and children alike. 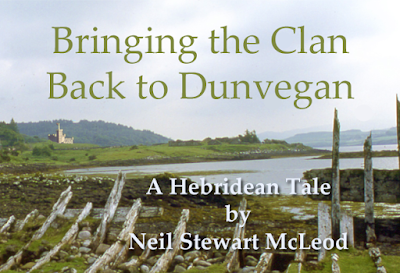 With a foreword written by Chief Hugh MacLeod of MacLeod this accumulation poem is the Clan MacLeod equivalent of “The House That Jack Built” and is filled with references to the principle iconic features of clan tradition that children should know and love. It features the Castle of Dunvegan and the drinking horn, the Fairy Flag, and the great Chief, Dame Flora MacLeod of MacLeod.

Anne and Seamus MacKinnon have allowed me to use a particularly lovely view of the Cullins from the sea. Likewise Darby Sawchuk’s picture of the castle with the tables behind is about as good as they get. Ruari Halford MacLeod allows me to copy his drawings which so excellently augment the intent of the lines. My old friend Neil R. McLeod the photographer and Penny DeGraff have supplied excellent images of Chief Hugh and the gathered clansfolk. Lynne Leslie acted as liaison with Chief Hugh, and both must be thanked for the endorsement in the foreword.


The book is available from Amazon please review the book when you have read it.  Thank you!

Posted by Neil McLeod at 9:59 PM No comments: