Serendipity and the Plumbers Wrench 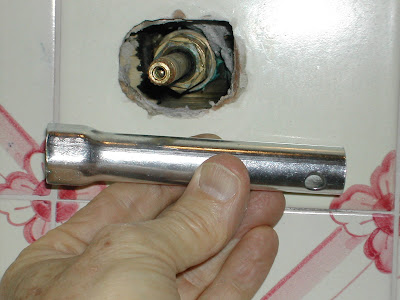 My wife asked me if I could finally fix the shower handle this morning. It is a blue job. The handle drops under its own weight and as it does so the water gets hotter and hotter and faster and faster. There is a pressure ring in the stem unit that can only be tightened with a hollow wrench stuck through the wall.

“What I need is a three quarter inch plumbers wrench.” I said to Gilbert who was standing behind the service desk at PepBoys on Hollywood Boulevard. He had a bar code tattooed on his left forearm. “It has to be open at the end so that ths stem of the shower handle can come through.” I had already been to Ferguson’s the plumbers supply that morning, and they said they don’t make that size any more. “How much are they selling you for Gilberto is it?” I asked indicating his tattoo.

“ The ones over there are what we’ve got.” Gilbert replied showing me the rack of what looked like different sized spark plug wrenches. So I picked one that was three quarters of an inch and having tried to check that the stem could go through the end by asking if I could take the plastic tag holder out of it, was told “No! You have to buy it first.” I settled and realized I would have to try to turn the wrench with channel locks hoping it wouldn’t slip on the shiny smooth side. The sprocket wrench would not fit into place when the spindle from the shower handle was sticking through it. 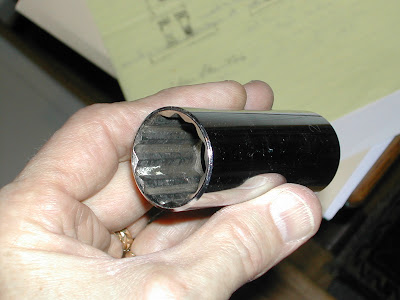 Are you still with me? Here comes the magic! So, I am at the checkout stand and Angie, she’s really an angel, takes my money. I ask her, “Can you get this piece of plastic out for me?”

Well she struggles for a bit and tries to push it out with her pen. I suggest a Phillips and she opens a drawer at her feet which looked like the ‘odds and sods’ drawer in our kitchen, only bigger. We are looking for a hammer and a strong rod to push the tag holder out, and there on the top of all this junk, is a plumbers wrench. It’s not wrapped or anything it’s just there with all the other tools and stuff. I reached in, picked it out and measured it. Three quarters of and inch. Isn’t that amazing?

“This is what I want.” I said. “Can I have this? Can you sell me this, you can keep the shiny sprocket wrench, this is what I need.” At that moment Gilbert came up to the checkout stand, and hearing my request said he would have to speak to the manager. So back we go to Melvin at the service desk. I explain that this tool is what I came here for, and that I have been looking for it for a while, and this is the second place I had been this morning and... “ You can have that." he said.

I am just a little thrown for a moment. These things do happen to me once in a while. You know, like when I was hoping that when I got off the plane in San Jose there would be someone, an angel, right outside the airport ready to take me over the hill to Santa Cruz instead of having to take a cab to the station and then catch the bus. Well that happened to me. The second person I asked “Are you going to Santa Cruz?” said yes. When I asked if I could share the gas money and catch a ride, they said, “Well let me just ask her. She's driving up right now.” I got that ride in a white Mercedez, and here this, morning I was being offered the very tool I need for nothing.

The Angel took my return and gave me back my money. I thanked Melvin, and he just said, “What you give freely in this life comes back to you a thousandfold.” I was struck by the prophetic message coming from this thick necked macho Hispanic who was running the Hollywood shop and had such an unlikely name. My wife is happy with the shower! 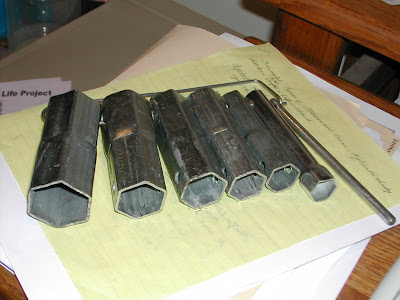 My completed set of wrenches
Posted by Neil McLeod at 1:23 PM No comments: