The Koran its secrets and the Moslem Culture Clash 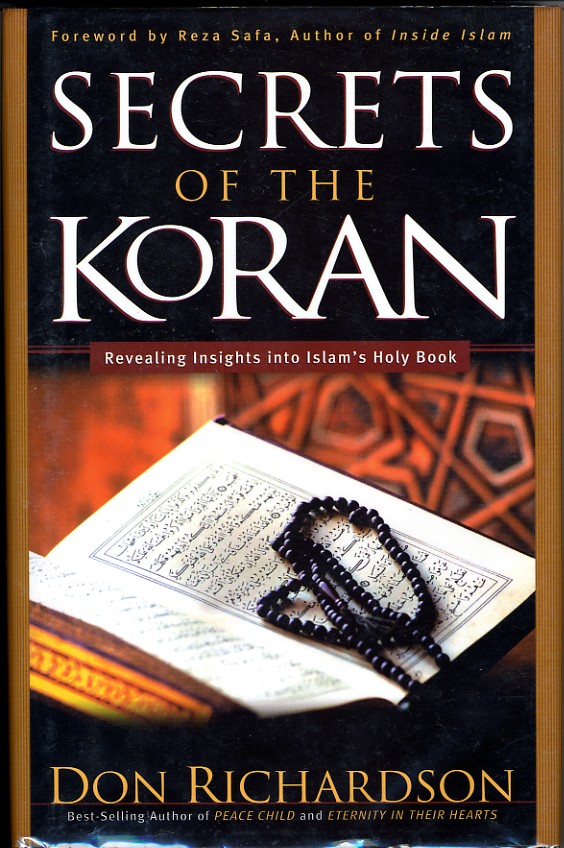 Don Richardson’s little book “The Secrets of the Koran” is a quick read, but once finished it has left me mulling over the implications of what he revealed. He shows that the Koran is no great literary work, that it is in fact boring and repetitive and filled with errors. More frightening is the clear instruction that this text commands of its readers to kill and maim any who decry its content or fail to adopt it as their guide to spiritual life.

Since consuming its content I have watched horrified as the daily reports come in of what is happening in the Middle East and around the world in the name of Allah and his Messenger. Don shows how the selected verses from the Koran are used to infuse hatred into the minds of young men, boys, in the Madrassas, the Moslem schools. At the peak of their sexual drive they are taught that while they are abstaineous now they will be rewarded with excesses of pleasure if they fight and die for the cause. And what is the cause? To attack and repress all infidels, to eradicate them from the face of the earth. Hence, in countries where they have sway churches and temples are burned, bombs are exploded and innocent people are slaughtered.

The biggest secret is the fact that hardly any Moslem has ever read the Koran. In fact just ask any devout Moslem if he knows or has read the Koran. The answer is likely to be “No, but I know what is in it". Ask for an explanation of why the story of Exodus is told twenty seven times, each time differently, and all of them wrong. They do not mention the most important aspect of the miraculous history, the Passover. Even though Mohamed was a Jew, he was illiterate to his dying day, and his ravings were written down by scribes. The retelling of Jewish history wrong takes up much of the Koran, and in what is left one in fifty two verses is a war verse inciting believers to attack and harm and abuse Infidels. By infidels I mean thinking people who dare to question the concoction of confused lines, and have not blindly accepted them as their “bible”.

There have been no Luthers, no Calvins, no Knoxes to reform Mohammedan thinking. The major thrust of all Moslem societies has been to enforce Sharia Law and marginalize any who offer alternative beliefs. The aggressive application of this principle has cowed all development and evolution of thought, and results in a repressive primitive philosophy which keeps its adherents in the a mind set fit for the Middle Ages.

In looking for explanations for what we are witnessing, I have seen nothing which crystalized the problem better, than an interview with Wafa Sultan on Al-Jazeerah Television on Februaray,12, 2006. Here is a link to the stream, which I request you visit soon. I have loaded it up on youtube.com . This Syrian psychiatrist has managed to explain the problem in the Middle East conflict, and we all must re-think why we have to support our President and Israel. If we don’t our very culture is at stake.

Posted by Neil McLeod at 9:53 PM No comments:

The Times They Are A'Changing 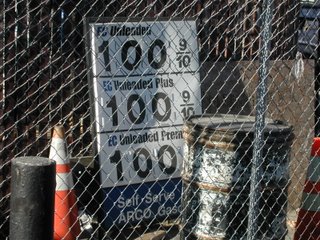 This morning on my way to drop my boys off at school, I stopped to buy gas for my Honda Odyssey minivan. It was an Arco station, nothing unusual except that they charge too much like everywhere else, except perhaps Costco. I spied something that struck home to me as a significant mark of change in our way of life, and we have only just begun to realize the half of it.

What did I see? Well take a look! It is a disused gas price sign, tucked away behind the fence with the barrels of oil to be dumped, and never to be seen again. Why I ask is it there? Examine it carefully and see if you can spot why this change had to be made. If you want help look at the new sign which replaced it. 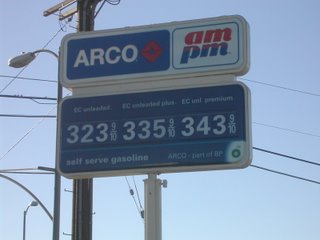 Now after you finish gulping at this astronomical increase in the price of our daily essential, reflect on how the sign-makers never expected the price of gas to exceed a dollar something. There isn’t enough room for more that a one.

Come senators, congressmen
Please heed the call
Don't stand in the doorway
Don't block up the hall
For he that gets hurt
Will be he who has stalled
There's a battle outside
And it is ragin'.
It'll soon shake your windows
And rattle your walls
For the times they are a-changin'.