The Trial by Fire - The Corey Rose Story

The fire was raging. Thousands of acres had already gone up in flames. The tall pine forest was an exploding glowing furnace.  Then the wind shifted and increased in speed, and on his own, on the road to Hell Hole, a fireman asked himself what kind of mistake he had made and how he was going to get out alive.  To hear him tell it now Battalion Commander Corey Rose, really thought he was trapped, and after texting his position he sent a final message telling his wife and boys that he loved them.  All around him the thick belching smoke churned up and masked all but a patch of blue above the tall trees still showing through a red haze of glowing sparks.  What was he to do? Positioning his vehicle on a bridge over the gulch way above the river, he got out to assess this final situation. Remembering an image of deer in the river during a forest fire, he grabbed what gear he felt he needed, and grappled his way slipping and falling down to the water.  It was not flowing fast and he was able to immerse himself and turn his face away from the heat and the sparks roaring by at some eighty miles and hour.  With tree limbs crashing down and the and temperatures soaring to the thousands, Corey knew that it was by God’s grace that he survived that day.

At Men's Ministry at Grace Community Church, Commander Rose LAFD was our guest speaker this week. We were blessed to hear his testimony about this life changing experience, and how he expected to be admonished for the decision he made that day that had got him into such a tight spot.  Instead, he has been elevated and put back at the front of the line where his knowledge and wisdom can now be applied to benefit others at risk on our behalves.

There’s a special place in Heaven left for Firemen,
I am sure Our Savior’s setting it aside
He’s keeping it reserved
for all who know the word
In a section that He looks upon with pride.

He knows it takes much courage and devotion
To face the heat and danger of a fire,
And when called to summon nerve
and deal with it with verve
And a metal that we average men admire.

He’s calling every fireman back to him
Of that there really cannot be a doubt,
For in the other place below
Where the rotten sinners go.
He doesn’t want them putting fires out.


Neil Stewart McLeod
Posted by Neil McLeod at 6:27 AM 1 comment:

In 1974 I entered the international dental program (Special Students) at the University of Southern California School of Dentistry.   They had a two year doctorate training for foreign trained dentists which was quite remarkable at the time.  Not only did the teach the complete dental training but they included Gnathology with guest speakers like Charles Stuart and Peter K. Thomas.

I want to remember one of my teachers today, his name was Peter K. Thomas DDS, an internationally renowned teacher and lecturer of restorative dentistry. In 1974 and ’75 at the USC  (now the Herman Ostrow School of Dentistry) I attended courses from him. He was an inspirational mentor and encouraged nothing but the best, the harder right rather than the easier wrong. Once I graduated he invited me to join him at the Laguna Beach Study Club where he pounded in the refinement of Gnathological reconstruction and the art of cutting fine preparations and waxing up ideal gold onlays.  PKT took a shine to me and I certainly loved him. He always referred to himself as Papa Thomas and the picture below captured the affection between us.

It was Dr. Thomas who got me into the International Academy of Gnathology which had some really elegant meetings. We had a dinner for Dr. Thomas in West Los Angeles which was arranged by the renowned master dental technician and laboratory owner Renzo Casellini (Swiss Quality Dental Ceramics and Dental Implant Studio) The image below was taken at that dinner and shows Peter in a private moment his hand on my hand. I was strongly encouraged to strive for the best by Peter. He always quoted Michael Angelo "Trifles make perfection and perfection is no trifle" 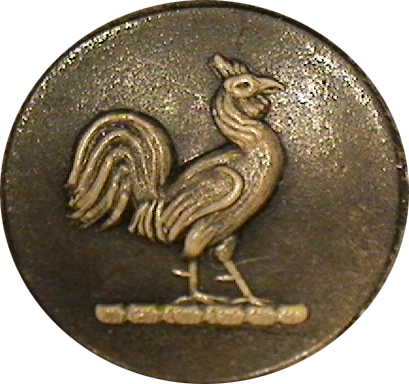 You see them across England
From Merrivale to Bath,
From Quantock Lodge and Tavistock
And up at Warden Park.
The grandest country mansions
That dominate the view
Have chimneys, towers and porticos
That Clutton built anew.

Clutton was the architect
He gave his buildings style,
With bold imposing mullions
And rooves of slate and tile,
Turrets on the corners
Towers that smack of rank,
With a clock and quarters
To conceal the water tank.

At churches, quoin and cloister
Henry hardly had a rival,
He single handedly achieved
A neo gothic revival.
Famous Little Gidding church
Would long have been forgotten
And we’d not have the Eliot poem
Had it not been for Clutton.

Old Battle Abbey cloisters
Lay in ruins ’till it was planned
To have them all restored again
And then by Clutton’s hand,
And many are the churches
And many a gracious spire,
That were by his design erected
We still see and admire.

Henry Owen Clutton, my maternal great grand father was an architect of some distinction, whose life and work was the subject of a doctoral thesis by Penelope S. Hunting.  In "The Life and Work of Henry Clutton 1819 - 1893, Dr. Hunting explores the professional relationship with William Burges and their design for Lille Cathedral.  The study includes the nature and distribution of Roman Catholic Church building in the second half of the nineteeth century.  My grandfather converted to Catholicism at a crucial point in his career and undertook the designs for the erection  and restoration of country churches for the Dukes of Bedford.
At a time when new construction was keenly sought to include interior lavatories and bathrooms, elevated water tanks were concealed in towers and high rooves.  The sites where Henry Clutton's work may be seen are dotted all across England and the map below shows a number but certainly not all of them.  He had a bold style with strong horizontal lines commonly incorporated in the design. 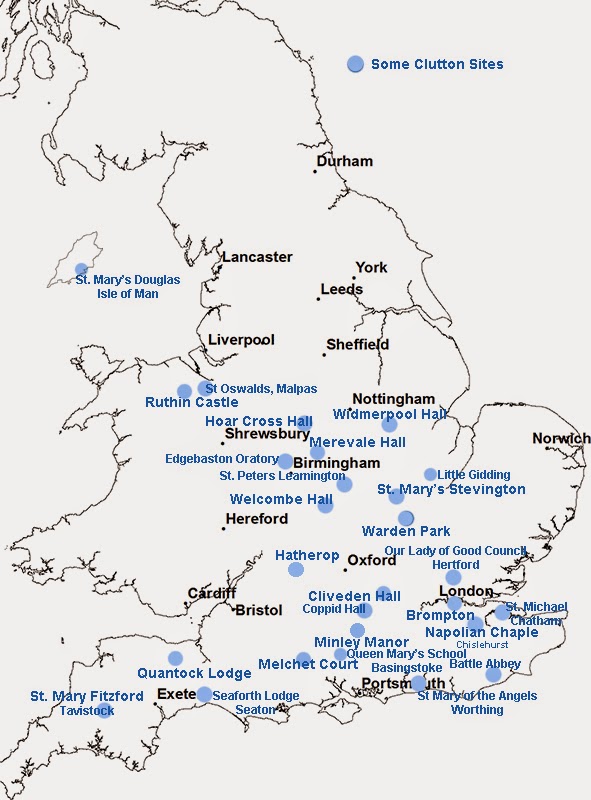 Many country homes that were built or redesigned by Clutton are featured in another book by Dr Hunting, "Henry Clutton's country houses".   A third book "The Saint and his Disciple" by this same author, explores the relationship between Cardinal Newman and the Reverend  George Dudley Ryder, and features a lot about Henry Clutton.

Henry Clutton's published work of note is "The Domestic Architecture of Medieval France" rare copies are still to be found. 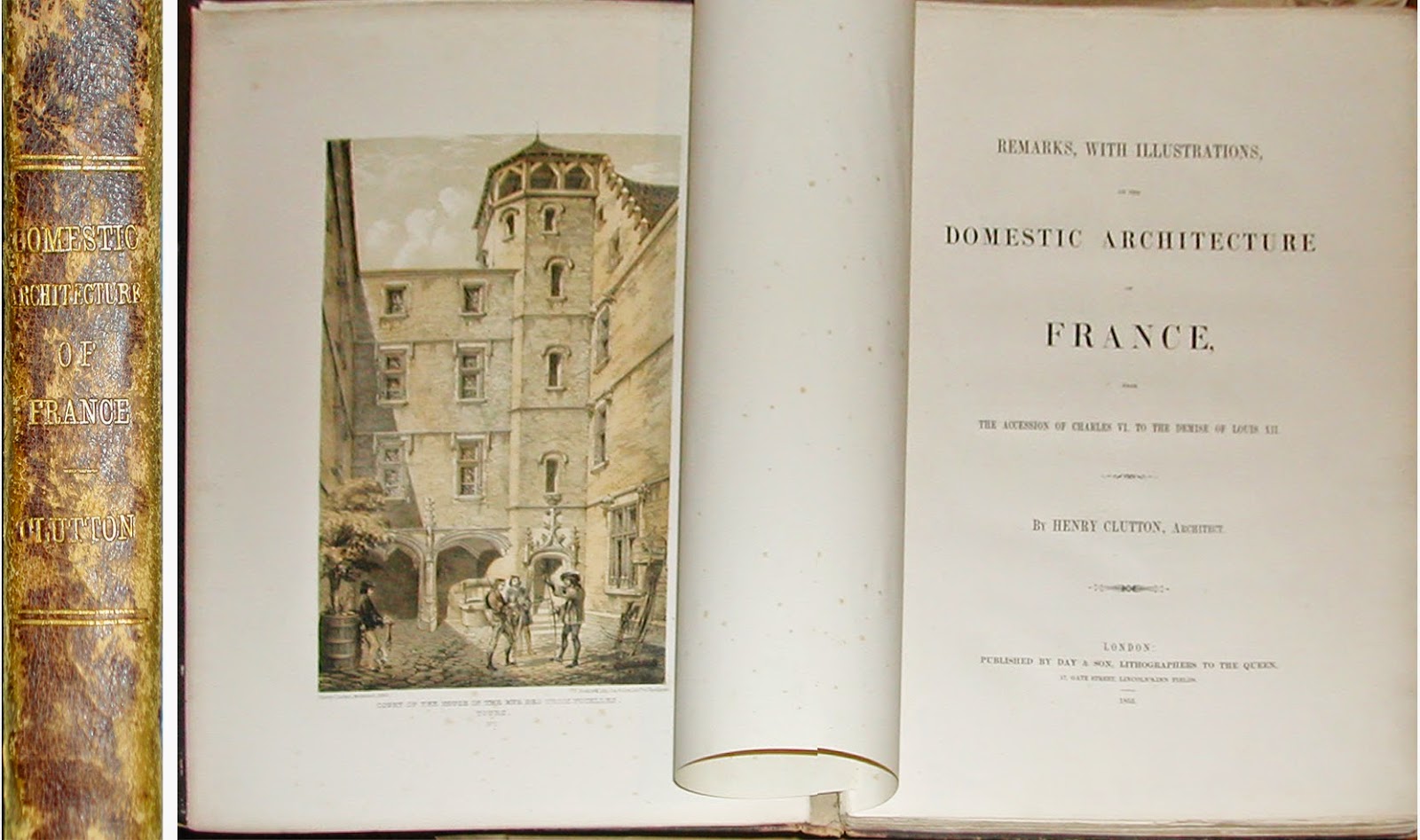 Henry Clutton's greatest achievements might be considered the founding of the Architectural Museum, which was later absorbed into the Victoria and Albert Museum, and certainly the winning design of "Foederis Arca" the Lille Cathedral design competition in1856. This established Clutton as a master and leader of the Early French phase of the neo-Gothic Revival. 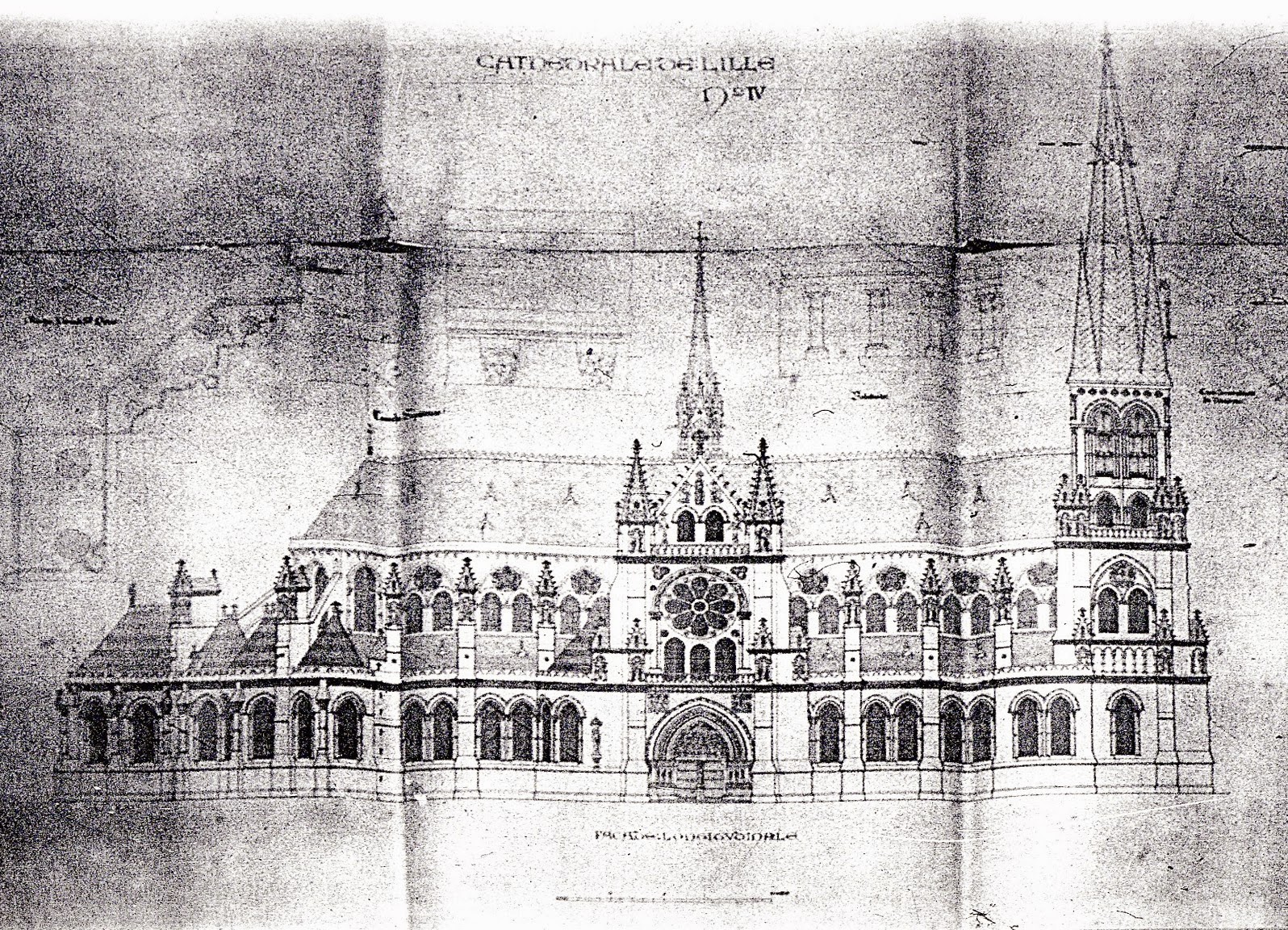 Sadly this winning design was never allowed to be used by the French authorities because it was discovered that the architect was English (albeit descended from Norman stock accompanying William the Conqueror in 1066 - hence the crest of Chanticleer heading this post.)