Anselmo - Return to the Chapel on the Hill

Today we revisited Our Lady of the Seven Sorrows, the chapel on the hills at the Anselmo Vineyards.
What an astonishing accomplishment Reverge Anselmo has achieved.  What a blessing to the community and all who visit. 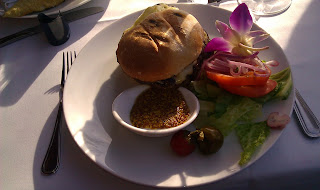 We dined to celebrate Nancy's birthday, and Reverge allowed us to sample his fine Cabernet wine, which is rich, smooth, round and sweet, with a fruity nose. The food is delectable and the chef takes a great personal delight in creating memorable dishes impeccably displayed. 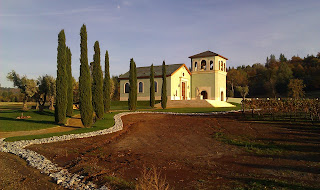 After lunch we walked up through the vineyard to the new sanctuary. immediately one is struck by the completeness of the project which a year ago was having the roof placed on the tower.  Thoughtfully placed Cypress trees add a traditional old world timelessness to our approach of this inspirational setting. 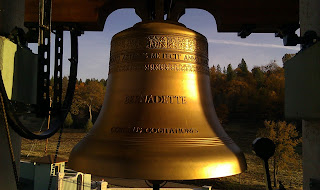 Ascending the tower one can take in the view down across the daintily groomed vines to the ranch buildings set among the oak trees, and out in the distance the snow-capped peaks of Mount Lassen. Beside you are three handsome bells, Bernadette, Simeon and John. The castings are beautiful and the tones that peel out over the valley are perfectly pitched.

The completed sanctuary exquisite with a mosaic of Abraham and the visit from the three angels above the altar, (Genesis 18:2), an iconic recreation of the Rublev's Trinity. 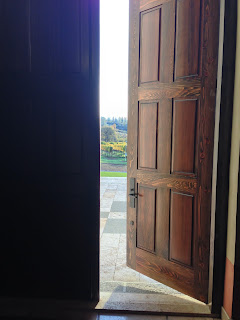 The view out of the huge church doors is of the vineyards and the distant mountains. 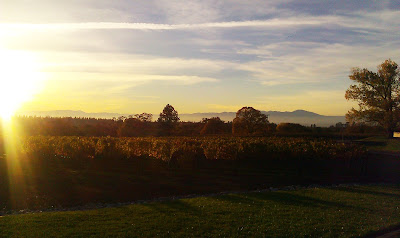 We left enriched and uplifted from the experience,

and will surely return! 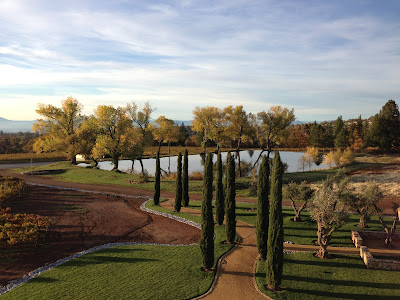 Frances Cecila Clutton, the daughter of Francis Owen Clutton, Solicitor and Elizabeth Atherton, and grand daughter of Henry Clutton, the renowned English Architect, was born on the “Rocks”, 493 Alfred Street, in Sydney Harbour in a Seaman’s Medical Refuge center after a rough voyage from Wellington, New Zealand on the Steam ship Ulimaroa. She was raised in England and educated at Roehampton and on the Continent by the Sacred Heart Nuns.

When war broke out in 1939 she applied and was accepted into the Wrens (Women's Royal Naval Service) and was stationed in the Admiralty Command Centre in Liverpool.  She was a war bride marrying Roderick Murdoch McLeod RHR (Royal Highland Regiment) in Torquay, Devon on 28th February 1942.  They made a home in Oxford where her husband was to attend Merton College.  His recruitment by the Foreign Service to work in Kenya drew the family to that colony in 1951.  Though estranged by 1953 she struggled on to support her family returning to England in 1958. For years she worked in a variety of positions both menial and professional in school catering, assistant nursing and as a librarian in The Institute of Commonwealth Studies "Queen Elizabeth House" in Oxford, and she retired to Australia in the1980's to the mild climate at the foot of the Blue Mountains. She is survived by her five children Flora, Neil, Alan, Roida and Ewan, and numerous grandchildren and great grandchildren.  Frances was well educated and greatly gifted.  She wrote beautiful songs and poems.  Her Kenyan songs and the “Skye Lullaby” are recognized treasures.  Bright and cheerful to the end she finally succumbed to complications from right side heart failure just a few days shy of her 97th birthday.  On the Feast of All Souls, Mass was offered at St. Andrew's, a church our mother loved when she was in Edinburgh, for her repose.

Frances was a close friend of Dame Flora MacLeod of MacLeod, and her eldest daughter Flora was born on Skye, the MacLeod Chief became her Godmother.  The strong link to the Clan MacLeod has been a part of her children's lives. 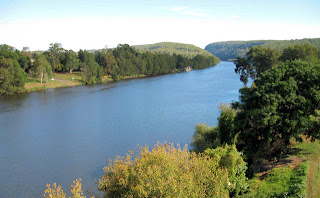 Do not lament my passing,
Rejoice, my long life is through.
Know where I go there is rest and peace
And I shall be waiting for you.

Scatter me where my thoughts would go
On a hot Australian day,
By pool and bend and at the end
To the sea as I slip away.

There on the banks of the Nepean
Should you once more chance to hear
The piercing note of the Bellbird’s call
Think I may linger near!

No more will I sigh or shudder
At the turmoil here below,
For my soul is freed to wander
To my long home I go.
Posted by Neil McLeod at 9:16 AM 4 comments: