The Grosvenor's Song - A Salute to a Roast Pig 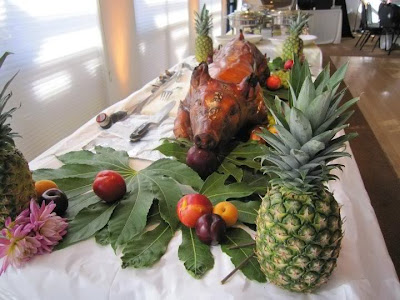 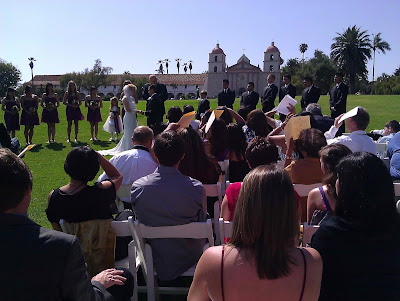 It was a beautiful wedding. Yes I know you have heard that before, but this really was exceptional.

The setting was the great lawn which gently slopes down to the Rose Garden before the rebuilt facade of the Santa Barbara Mission. The day was warm and bright with a soft breeze that rustled the tall thin distant Eucalypti, and the classically Spanish buildings stood out against the green and clear blue sky. 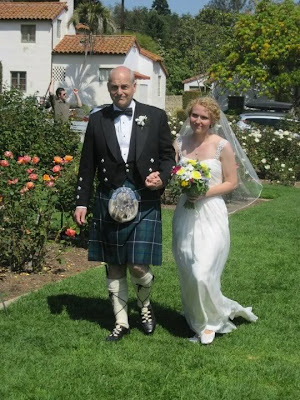 Sarah was the epitome of a blushing bride as she and her father, Bill, followed the rose petaled path to stand at the head of our white chaired aisle. There Elias waited with his groomsmen and the bridesmaids.

The officiation and the message to the couple by the Reverend John Johnson was tasteful, and a traditional Filipino covering of the couple with a veil and cord ceremony was a poignant aspect to the service. At its end a serendipitous ringing of the mission bells occurred as if publicly acknowledging the proclamation of “Man and Wife”.

The reception was held at the St. Barbara Greek Orthodox Church Hall high on the hill overlooking orchard groves, an idyllic spot.

The tradition continued in the fare for the reception when a roast pig was served, they call it LeChon Baboy in the Philippines. Sarah had requested that a ceremonious toast to the dish be given in the style of the Scottish “Address To A Haggis”. So I wrote and recited the poem, and Bill Beech, the father of the bride, made the first slice. 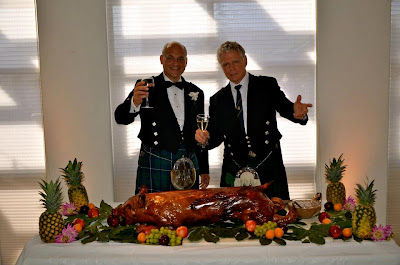 Grosvenor’s Song
Written for Sarah Beech and Elias Busuego on their wedding day when a roasted pig was served the Filipino way. This is a culinary tradition as old as the hills and which the Grosvenors, have as a part of their personal history that dates back to a famous episode when a culled boar dressed a royal table and gave name to a dynasty, which was that of Le Gros Veneur, great huntsman, to the Dukes of Normandy. The ceremony of Adressing the Haggis is well established in Scottish Tradition, and so a kilted clansman proposing a toast to a pig should not be an event that causes aversion. I read about the Chinese Boatmen in “Guns Germs and Steel”, and my friend Tony Santarelli the Immigration attorney, gave me direct information about his participating in a Boar Hunt in Argentina. I also have a direct experience of roasting a pig in Our Garden in William Street, Oxford, when Branko Babic and his brother helped us McLeod to build the fire pit and roast the porker. 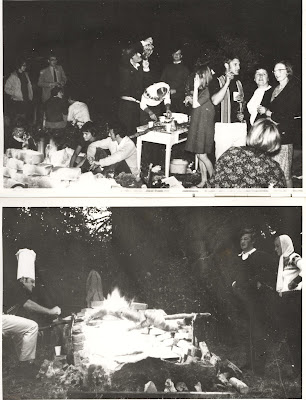 I sing for you a song of old
That goes back through the ages
A song that tells about a feast
That fills out history’s pages,

When King William the Conqueror
Went hunting for a Boar
He gave the knight who felled the beast
The name of “Gross Venor”
And Grosvenor, the Cheshire Lord
When the gong for dinner rang
Brought forth the game all garnished
Au pomme between his fangs.

They sliced him and they spiced him
And they turned him on a spit,
And served him with mouth open wide
An apple stuffed in it,
With “Salut à toi grand Sanglier”
The chant was made with glee,
That rumbled round the Norman hall
From all the company.

The ancient Chinese boatmen
In outrigger canoe,
Never sailed away to sea
Without a pig or two.
So in Hawaii we have the Luau
In the Philippines Lechon
And all across Pacific Blue
Some local variation.

When down in Argentina
To be macho just for fun
They track down the Jabalí
Without bolas or a gun,
The Gaucho on the Pampas
To impress his girl or wife
Will go hunting for the Wild Boar
With nothing but a knife.

And so it is that round the World
In many different ways,
The grand tradition of roasting pork
Is kept on wedding days.
They toil to bring the trophy home
Hoist it up on high,
And “crested” serve it to their guests
...“with Bay and Rosemary.”

Hail to thee Ĺechon Baboy
We thank God for your breed,
You grace our board and bring us joy
When we a throng would feed.
From age to age your visage
Has made banquet for a king,
A toast to thee and thanks as
You are served at this wedding. 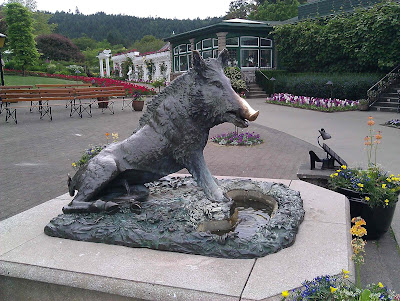 This Statue of the Wild Boar was posed waiting to be photographed after the wedding when Nancy and I took a trip to Victoria to participate in the Pacific Coast Society For Prosthodontics this year 2012. It sits there in Buchard Gardens, a masterpiece!

Posted by Neil McLeod at 5:56 PM No comments: