A First Christmas in Koru, Kenya - A Memory 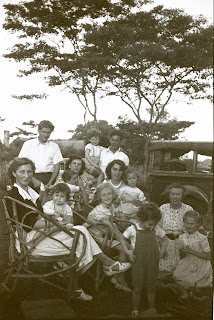 A First Christmas in Koru

The picture shows a family group with friends in1951. My father is holding me in the back row and Alan is wearing the bib trousers center front. Yvette is sitting in the chair with Roida and my eldest sister Flora is to their right in the center.

When my mother became very ill with malaria in our first year in the Kenya colony, and my father was away, my brother Alan and I celebrated Christmas with the Langs, two older sisters who lived across the road. They kept a traditional holiday.

It was Christmas Eve and for two little boys
All was not well, for they’d left their toys
And their baby sister and mother at home
And with local neighbors were lodged alone,
To share with them the holiday season
And though they did not know it this was the reason.
Their mother who was the best house keeper
Who washed and cleaned, there was none neater,
Who sprayed pyrethrum every night
And made sure the screens were all shut tight,
And who knelt by the beds, head under their nets,
And said prayers and kissed her darling pets,
Had herself by the Anaphalis been bitten
And with waves of fever her body would sicken.
And so it was they were lodging away
From home and family that holiday.

Now the neighbors, the Langs, lived just over the street
Where the old tree branches in the center would meet
And doves could be heard in the afternoon
Cooing their soft almost sorrowful tune.
These two older dames now lived there alone
Their family and husbands had long since gone.
Their house was filled with things small boys admired
Nicknacks and treasures in a life time acquired.
On a carved wooden side table set by the wall
By the front door as you enter the hall
Was a little brass ash tray from the Arab bazaar
And horse brasses, mementoes from England afar
Enamel pill boxes perhaps from Limoges
A framed photo of a soldier with ribbon in rows.

Now when those boys arrived they were welcomed and fed
Briefly shown round the home, washed, and then put to bed.
How they missed their mama to kiss them good night,
To kneel and say prayers and to tuck them in tight.
And when at last good night had been said,
And they were both snuggled safe in a bed,
They each mumbled softly their own quiet prayer
And asked God to guard them and protect them there
While they were sleeping until the dawn
And bless them with presents on Christmas morn.
And in the room with door shut tight
And the crack at the bottom was the only light
And by it they could see in the gloom
The dressing gowns on the hooks in the room,
To the sound of the crickets comforting song
They drifted to sleep before very long.

When first light came on Christmas morning,
Before the sun was up with the dawning,
There never was a boy more frightened,
Who round his head his blanket tightened,
For he saw he thought at the foot of his bed
By the door with a bulging head,
Some creature unbeknownst to him
Hard to discern in the light so thin,
Standing silently lurking there
With a glint in its eye with the soundless stare.

Then he called to his sleepy brother and said,
“What is that there at the end of the bed?”
But he could not get his brother to rise
He could not get him to open his eyes,
But he peered again just a little bit longer
And it seemed as the light was just getting stronger
That what ever it was that was there by the door
Looked just a bit different than it did before,
Now he wasn’t quite sure and he’d had such a shock
But could that thing hanging there just be a sock?
A few minutes more and the sky was brighter
A rooster was crowing and the room was lighter,
And he saw with relief and surprise on the door
Two stuffed stockings that were not there before.

At once he saw the mistake he had made,
That the socks were the gifts for which they had prayed.
And soon both were up and were trying to choose
From each of the stockings just who’s was who’s.
They each had a trumpet with a shiny horn
That had glinted like eyes in the early morn,
There were oranges, sweeties, pencils and nuts
And a pen knife that looked like it actually cuts.
Leaving their bedroom and shouting with glee
They ran to the parlor and there saw the tree.
So this was the first Christmas they would recall
And the stockings are what they’d recall most of all.
Posted by Neil McLeod at 8:04 PM

Hi,
I lived in Koru about that time. I would like to compare notes if possible.

I live in koru now. Any chance of finding out more about you?

Both of you email me at drneilmcleod@yahoo.com and let's start a dialogue about Koru.

Hello
I also lived in Koru, as does another childhood friend..Martin Taylor..
I will very enjoy sharing ..
Regards
jennie

Rob,
are you by any chance Anna's younger brother? If you are, you guys moved to Armadale in WA as I recall and I often wondered whatever happened to you all.