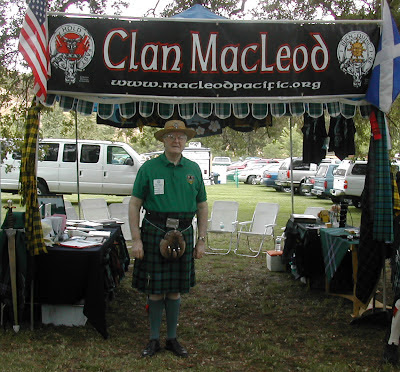 A Lament for The Games At Coombs Ranch

For years, I well remember, in the middle of September
When the Californian summer lingers like an endless song,
Near that central valley city, where the grape vines look so pretty
And the broad San Joaquin River ambles silently along.

Where fields rise above the banks and great oaks grow in ranks,
And the grass is green and flat beneath their shade,
At a ranch called “River Bend” owned by Dennes Coombs, a friend,
Great schemes to hold a Highland Games were laid.

Well, Dennes Coombs and Truman Campbell, round that ranch they took a ramble
With Ms. Dunklee and Bill McLeod in tow,
And it was agreed together that right there in clement weather
They’d host a Games to which the folk might go.

Looking back they got it right, for this very bonnie site
With its lawns all sheltered by the tall tree groves,
Proved to be a prime location, where without hesitation
Stout hearted Scots folk came with friends in droves. 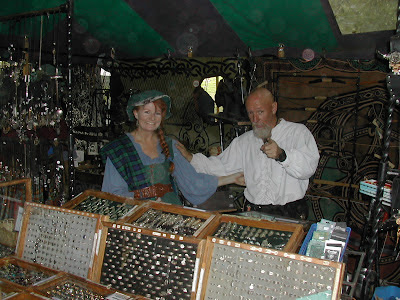 Vendors came one day early to avoid the hurley-burley,
And set up their pavilions and their stands.
With all kinds of things for sale, ghillie brogues and coats of mail,
China crocks and books and Celtic wedding bands. First thing the trucks appear with the athletes and their gear
And weights and cabers lashed up to their hitches
Through the day they’d show their form of Scottish stealth and brawn
Sending awesome weights a hurtling down the pitches. 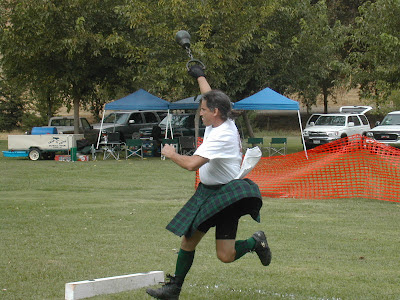 You could buy your tartan kilt, or a sword with basket hilt,
Or a Kitchener pith helmet like a Sahib,
Or a jacket and a bonnet, with you family crest upon it
To make your first foray in Highland garb. 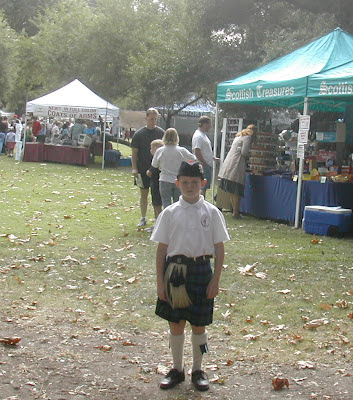 Then came the pipes and drums, and they filled the air with thrums,
Their music stirred the blood within the vein.
Marches, jigs, Strathspeys and reels, had us kicking up our heels
As they paraded down the field and back again.

The clans folk also came, of the blood and of the name
Who raised their tents beside the glen in rows,
Men sported badge and kilt, and wore bonnets at a tilt
And the lassies had their hair in tartan bows.

The children they would play in the river through the day,
Where the shallow water rippled by the weirs,
Catching tiddlers and frogs or making dams with rock and logs
While the lilting skirl of bagpipes filled their ears. 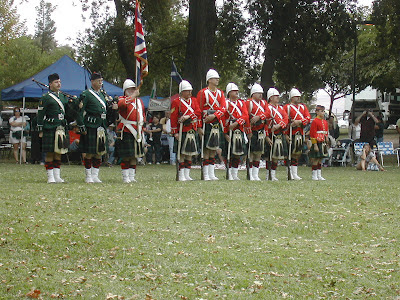 At noon when colors advance and we all would get the chance
To cross our hearts and pledge our promise true,
Star Spangled Banner we’d chorus and the Flowers Of The Forest,
And we’d tear up with emotion at the view.

For the ranks of Highland Men were parading through the glen
In their tartans with their banners flying high.
And the pipes and drums played loudly and the gazing crowd stood proudly,
With the sparkling glint of tears in every eye.

But one day Dennes lost his ranch and it was said we’d lost the chance
To hold our Highland Games some made remark,
But hats off to Fresno City who rose up for us in pity
And let us have the games in Roeder Park

They still tell this tale today, with longing hearts they say,
That the story teller keeps it in his quiver,
And the legend lingers on in our hearts and minds and song,
When the Games were held at Coombs Ranch by the river. 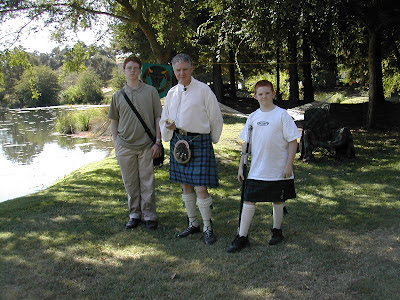 The Chairman said...
This comment has been removed by a blog administrator.
8:34 AM

Neil McLeod said...
This comment has been removed by the author.
8:39 PM

Neil McLeod said...
This comment has been removed by the author.
8:39 PM

Neil McLeod said...
This comment has been removed by the author.
8:40 PM