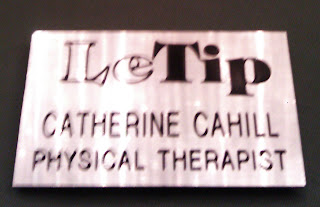 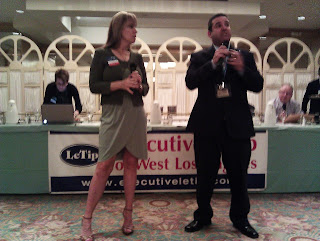 On August 9th, Cathy Cahill, the well known West Side Physical Therapist, received a special award for going the extra mile. Cathy is President of the Executive LeTip of West Los Angeles, an eighty seven member strong, committed networking group.  She was presented with her Silver Badge by Douglas Christian, the Insurance agent and president of West Side Referrals. Networking is all about bringing guests and finding out how you and they can refer to each other.  It takes bringing lots of guests and having ten of them enroll as club members to be awarded a Silver Badge.  Cathy has done this, and is an example to us all.  She is an excellent therapist too!

Executive LeTip has been networking and cross referring business in Los Angeles for twenty years. You could even say we are established.  There was a big celebration last month to commemorate the occasion of the twentieth anniversary of our founding.  Diana Hobson, the principle founder, was there, with Charlie Farrel and Barry Sikov both former members and past presidents, and others who have served in that capacity.  Rick Baum saw fit to Saber the Champagne to commemorate the occasion.  It was a novel addition to our breakfast fare.

You will notice that among the President Challenge Cup winners, that Cathy Cahill is in the ranks.
So join me in congratulating Cathy!

I want to peruse my career as a dentist. I have finished my education and decided to get training through dentist Hermosa Beach.

Looks like Crazy Cahill crashed and burned Le Tip to the ground. Saw that coming a mile away the way she bad mouthed all the members behind their backs.

good article from u thanks for sharing.