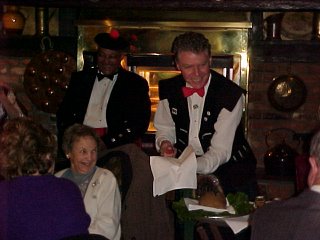 Here we go, one month after Jesus’ birthday Scots worldwide celebrate their national bard, Robert Burns. The corporal details of this much loved poet are drummed out once more, and favorites like “To A Mouse” and “To A Louse” and of course “Tam O’ Shanter” will delight audiences and diners alike. More than enough "horizontal lubricant" will be consumed in stark contrast to the reserved polite Christmas revelry, and undoubtedly there will be ample opportunity for those who neither care nor know better to degrade themselves in public and private. January 25th is Robert Burns birthday, and he is well remembered.

Not least among the literary treasures that are trotted out is the “Address To A Haggis”. It celebrates a humble dish made of left overs and oats, spiced to taste. It has become traditional, and nothing thrills the Scots more, to invoke pangs of squeamishness in the lily-livered hearts of their neighbors to the south by exhorting in grim detail the fanciful contents of this large round sausage. So much is this so, that a mythology has arisen concerning the origin and nature of the beast called Haggis.

It is with little reservation that I admit to you now that I shall be slaying the haggis again, first at the Mayflower Club, Eileen Selby’s British flagship on January 14th and then at the Tam O’ Shanter Restaurant on January 25th and 26th. My special dirk, I call it “Haggis Slayer” has been used for this one purpose for close to thirty years, and considering that it has sliced open haggis between twelve and sixteen times each year, I would hazzard a guess that it may have been used over four hundred times. I am sure that is some kind of record. Would any body like to correct me?
Posted by Neil McLeod at 8:48 PM