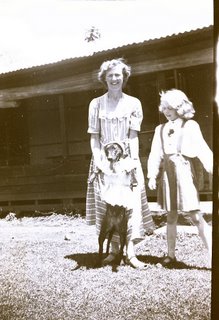 We lived on a bungalow in Koru in western Kenya in 1951, and the ceiling of the dining room was made of the plywood sides of tea chests. Across three of them the outline of the snake could be seen where it had died in the roof. Around two walls of the room was a python skin it must have been over twenty feet long. One morning I woke early to see what I thought was the hooded head of a cobra. As the morning light grew, I could more clearly see where the dogs may have torn the fly screen. The picture is of my mother, Frances, and my sister Flora, and Judy our dog that they have dressed up for the occasion. In the background you can see the Snake House.

I called it the snake house.
Others may not have done.
My mother and father may have known its address,
The house in Koru, on the hill
Half way up to the soda water bottling plant,
where heavy limbed trees arched across the road
And pigeons cooed when the light was soft.

I called it the snake house
My aiya might have done so
Having snatched me up when the green mamba
Was seen in the bushy hedge
Separating the terraced lawns with rose beds
From the fir tree forest
At the bottom of the garden.

I called it the snake house
And I always will
For three tea chest sides that panelled out the ceiling
Above the dining table
Were marked where the oils of departure
Seeped through to stain the wood
Showing where coiled one lay.

I called it the snake house
And so it is forever
For round the diningroom atop two walls
Was a python skin, full fourteen inches broad
No wonder when I woke one morning to see dimly lit
The dog torn fly screen
I mistook it for a flared cobra’s hood.

So I called it the snake house!
Posted by Neil McLeod at 10:52 PM