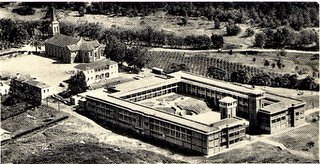 
Before posting a new poem “The Cuts”, I wanted to recall two school songs from my days in Kenya. They are most revealing. They remind of that the nuns and the priests employed physical pain to teach and to punish. (Blubbing means crying, which us boys were not supposed to do even after a beating)

...and now this end of term song:
"No more Latin, no more French,
No more sitting on a hard school bench.
No more going to Harny’s door,
Coming out with back side sore.
Kick up tables kick up chairs,
Kick old Harny down the stairs.
If that’s not enough to make him blub
Stick him in the washing tub."

The use of corporal punishment to maintain discipline in schools and other communal environments has been a standard in human society for centuries. Today’s kinder gentler policies seem more humane, and in line with a permissive all forgiving tolerant society. From my perspective, and much though I abhor personal brutality on the Rugby field, locker room, in a public bar, on the streets or in the cell of a dean of discipline, I can not help wondering if without it we have grown a new community where the consequences for your own actions are not daunting enough, and that there is now no discouragement for unprincipled behavior.

I think random acts of violence, destruction of public and private property, Graffiti, are the result of the anonymity that is now possible and the lack of appropriate punishment and the fear of it. 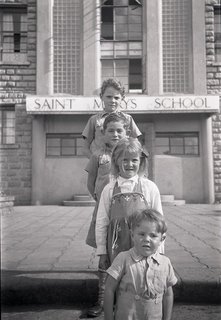 The Cuts
From 1955 -58 I was sent to boarding school in Nairobi. The School was called Saint Mary’s. It was, and probably still is a Catholic School run by the Holy Ghost Fathers and was arguably one of the finest schools in Africa. I never really liked it, but knew that with my father gone, we all had to put on a brave face and get on with it. Mum was wonderful about taking us out on certain weekends. We loved those times together. The worst thing about being at school, apart from the bullying, was getting the cuts from Father Harnet.

After prayers on Friday night
Some of us of boys were beaten
Nothing too serious of course,
Just a sound caning with three or six of the best.

We dreaded the litany that always came
After the Dean of Discipline’s indictment
“The following boys will report to my room
Immediately after prayers”.

We thought it normal
And if you had heard your name
You would scoot and edge to the door
While others had their eyes shut tight.

Then slipping down the corridor
And up the stairs to the dorm
You rushed to put all your week’s underpants
On beneath your khaki shorts.

Silently we lined up by the cell door
Knowing the cane was kept in a tube of linseed oil
From the inner room we heard the practice slashes
On a cushion and we shuddered.

One by one we filed in
Hands on the desk we took up ‘the position’
And when it was finished
Choking and humiliated we said “Thank you Father”.

On Saturday night we had the flicks
A newsreel, cartoon and a feature
Which was always fun
If you could sit without wincing.
Posted by Neil McLeod at 5:57 AM

Came across you while looking for images of Saints

Fr Harnett was a Holy Terror in my time too.
By the time I got to encounter him had had a stroke and was unable to lift his right leg when walking so his shoe would scrape on the floor as he came down the top floor balcony where the Junior dorms where. His nickname was Dragus as a result.

His cane was bigger in diameter compared to Fr McCarthy or Fr O'Sullivan (Tosh) who favoured thin whippy and stingy versions. Dragus's weapon left huge bruises that had great bragging value with you un caned contemporaries.

Never found anyone to tell that story to as I am not in contact with other recipients of the Dragus's rage. No wonder he had a stroke! He would go purple when in full tirade mode.

Hope you are well