Torture and Cruelty in Government Service 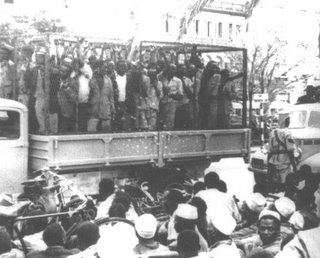 Discovering what my father’s job really was

I asked my father one day when he was visiting me at my old home in Laurel Canyon, “Do you remember the first time I ever saw a dead body?” We were sitting in the hot tub underneath the eucalyptus trees.

“Was it at Guy’s?” he replied casually. This was the obvious answer, for I had spent a number of years there studying dentistry at the medical school. It was on our minds as he had just given me an engraving of the Royal Albert Hall where he had watched me receive my degree from the Queen Mum. She was the Chancellor of London University. The graduation ceremony seemed a long time ago now, and I was ensconced on the hill with a practice on Sunset Boulevard. The present had brought it all back, it showed the Albert Memorial at the Knightsbridge side of Hyde Park, and the concert hall with its wide flattened dome and red brick facade across the road. I loved the hall. We would go there, ‘to dress the theater’ as students. Free tickets were made available on the day of performance, and could be obtained from the college porter at The East Wing at Guy’s Hospital. Once I went to hear the first concert after the new circular fiberglass dishes were suspended from the dome ceiling to improve the acoustics. It was an amazing program that included Bruckner’s sixth symphony which commemorated Wagner’s death, and has beautiful soft string passages and brash brassy highlights in the Wagnerian style, and also the 1812 Overture with cannon at the end.

“No!” I answered. “It was on the escarpment road going up to Nairobi.”

“Good God! Do you remember that?” he queried, leaning in from the side of the tub. He was more intent now than I had seen him appear in many a year, yet he had that rye knowing smile that said there’s a lot more to tell.

“Oh yes! And I’ve wanted to ask you about it. There’s something I don’t understand.”

“Go on.” he said looking directly at me now. The level of casualness had vanished and I felt scrutinized, glad that only my head and neck were out of the water. The recorded African jungle sounds were coming from the two speakers on the low dias, with potted geraniums at their sides. The controls for the bubbles and the heat were there at a touch of a button.

“Do you remember that time we were driving up the escarpment, I think it was in your new blue Chevy truck. You were giving two Askaris a lift. We had passed the little church build by the Italian prisoners of war, and we suddenly stopped to let them take care of that body that had been run over.” The road up from the Rift Valley was steep, with lots of bends and sharp turns. It lead up to the Kenya highlands, the plateau dominated by Mount Kenya at whose feet the Aberdere forests spread out and were watered but the mists, and where to the south, the capital, Nairobi ,was nestled on the some-times river at the foot of the Ngong Hills. The Askaris were the native police. They wore dark blue Fez hats with the silver Kings African Rifles crest, a matching blue jersey with leather shoulder pads, a white lanyard with a whistle on the end, and khaki shorts and navy putties. Their feet were bare.

“I never understood why they were fiddling with it and adjusting its position, nor why they didn’t just pick it up and take back with us or just chuck it over the cliff down the side. And another thing,” I said, “why did you leave them there out in the middle of nowhere?”

“Your memory is pretty good, Neil! I am surprised that you recall all that so clearly. You were only, what, about five.” His tone softened and he dropped the level of his voice as if he were going to tell me a secret. “Look son,” he said almost apologetically, but looking me straight in the eye, “we had that body under the tarpaulin in the back. We took it out there to set a trap, to see who came to collect it. We put the news about in the neighborhood that this man was missing, and had been run over, because we wanted to track the people who knew him and would come to claim his body.”

“What kind of work were you doing, Dad.” I asked, confused by this revelation which jarred with my notion that my father’s occupation was as a Labour Officer, working with the local District Commissioner, a man named Mason.

I did know, and I was horrified. A flood of memories came rushing back. The awful slaughter on the farms, and tragic return home of the farmers to find their hard work decimated by this terrorist madness. The abduction of Robin Touie, whose lacerated and fly blown remains were found rotting under a bush not far from the Spread Eagle Hotel. He had just gone out on his birthday to try out his new air rifle, and was never seen alive again. Oh yes! And Aunt Kitty sitting up late at night with the lamp out, and a rifle across her lap, waiting for a break in the song of the crickets, the warning sign of the approach of an intruder.

The rest of that evening is a blur to me now. I know we talked for a long time, but not much more was said about Africa, and dad always seemed reticent to dwell on any of his wartime or Kenyan experiences. In a way I suppose they were all part of the same collection of memories which for him were better not discussed. They were “Government work”. By the time I retired that night, the moon had crossed the sky and though hidden behind the cloud which surrounded us then, its light fell on the comforter of the waterbed.

Caroline Elkin’s book “Imperial Reckoning: The Untold Story of Britain's Gulag in Kenya ” which I have read has provided me with the answers my father never gave me. In grim detail the appalling nature of the Mau Mau uprising and the drastic measures taken by the British Government to crush it are spelt out. A million people were incarcerated during the 1950's. I remember we were terrified of the ‘oath takers’. We felt that they would come and murder us all in our beds. That is why we had armed guards protecting our home every night. Our fear dehumanized our enemies, and in our minds nothing was too bad to cure them, to make them admit their status and recant their oaths. When you feel that an individual has information the possession of which will prevent others from being hurt, harmed, killed, and they insist on concealing it, it is a natural instinct to exert what ever pressure you can to extort it. This had lead to cruel and barbarous treatment of prisoners, and wrong though we think it is, in the clear light of our land of the free, it was handed out by the British in Kenya, the Japanese in southeast Asia, and I strongly suspect that it is being carried out today by the American Government where necessary. War is not, never is, pretty, and the exposed underbelly of the victors in any conflict can not be expected to be all roses on close examination. Britain's attitude was that it had never happened.

Understand me, I am not defending what my father was doing in Kenya. Quite the contrary, I am saddened. The fact that he never talked about his war in Malaya and North Borneo, or his activities as a Labour Officer in British East Africa is witness enough to the fact that he was not proud of his actions. I just think there is a self righteous liberal seam running through western culture that fails to recognize that moving forwards traditionally means moving your opponents out in toto. Forgive them or re-intergrate them and you leave yourself permanently exposed to conflict and insurrection. The fact is that when someone needs something you have got, and they want it badly enough, they will go on hurting you, humiliating you, emasculating you, torturing you until you deliver or die from the cruelty. This is an aspect of war which we are refusing to accept, and will not condone in our own military, and it is a lie to say that it does not happen.

There is a particular image in the book of a lorry loaded with men standing in the back. The are the rounded up Kikuyu, being taken off to their misfortune in the screening camps. The moment I saw it I recognized it as a real and not infrequently seen. I was there in Kenya and this book has filled in the blanks
Posted by Neil McLeod at 7:13 PM