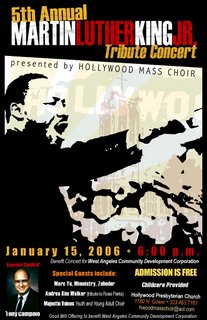 Torn between the choices

I can’t tell for sure when thespian tendencies surfaced and became an influencing factor in my life. I don’t think it was as early as the time when, at five years old, I failed to follow Mary, the one with the lamb, and make my grand entrance late as Old King Cole. My green tunic was raised, and in front of the entire rehearsal team I was roundly smacked, and me with no under ware. No it wasn’t then. But may be later in Oxford, when I strode the boards with the CODS, the City of Oxford Dramatic Society, and in the part of a young knight, took “All’s Well That Ends Well” in my stride. Yes, then it was that the ever glancing eye strained out for the proscenium, any proscenium.

Now I write and perform poetry with the least provocation, and welcome invitations. So it was that when Patrick Hare asked me to perform again for the Martin Luther King Concert I said yes.
I did not ask with whom I would be sharing the stage. I just assumed that as a church endorsed event it will be above board and in good taste. Once the advertising fliers came out I saw that Tony Campolo is to be a key note speaker. I also noticed that there is a distancing of any complicit support the church might have for this event on church property because of the inclusion of this caveat “The views expressed in this program do not necessarily reflect the views of Hollywood Presbyterian Church, its staff or its members”. I asked myself why they would feel the need to state that. They never published that when I was to read from Luke on Christmas eve. No, something was different. It was the controversial nature of our key note speaker and his support or lack of condemnation for the non biblical interpretation of the gay agenda which has characterized his public appearances.

So I find myself in a state of internal conflict. I agreed to support my friend Patrick Hare and the Hollywood Mass Choir, and yet I am anxious that none of the liberal agenda contaminate our celebration of the work and life of Martin Luther King in aiding the emancipation process in our great country. The two are entirely separate agenda. My piece this year is James Weldon Johnson’s “Oh Black And Unknown Bards”. I will be performing it this Sunday 15th January. The hyperlink can lead you to an audio recording.