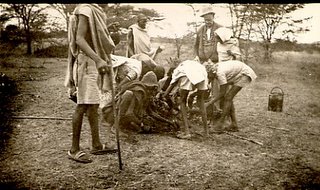 The Night Guard
When we moved from Kericho to Kitali, about 1953, the Mau Mau emergency was underway and we always had an armed guard, usually a Kipsigis Warrior, to protect our home while we slept. When great aunt Kitty came out to join us in the colony, she would sit rifle on her lap for many a night, then retiring late have tea at eight in the morning.

When night was almost falling, with the shadows getting long
Then came our noble Kipsigis with bow and arrows on.
With ‘Chamge’ we’d greet him and we were pleased to see
His semi and his arrows while he had his cup of tea.
When as the dusk fell deeply and mosquitoes start to sing,
We’d close the house and spray the eves but he’d not say a thing.
All through the night he’d be there some where near our home,
Guarding us against some Mau Mau villains on the roam.

In blackest night he’d be there watching loyal and true,
Listening for a break in cricket song because he knew
That when they stopped their calling there was something going by,
Something that un-noticed could mean he and we might die.
And if the air was clear and star and moonlight fell around
He would hide in bushy hollows or by lying on the ground
And all night long he’d be there, yet never make a sound
And even if you looked for him he never could be found.

When night was nearly over, and the air was chill and damp
You woke and wondered if your “Kip” had gone and broken camp.
You’d prime the stove fire embers banked from the night before
And having made the tea you’d take a cuppa to the door.
Peering out with caution you whispered ‘Chamge’
Thanking God you’d made it safely to another day.
And then out from the flower bed right before your nose
To take his ‘kongui mising’ our Kipsigis arose.

Chamge - Hail, Hello, a Greeting - with an extended sing song delivery on the last sylable.
Kipsigis - A large tribe of Kalenjin speaking people who live in the Nandi Hills near the Kericho district of the Rift Valley province in Kenya. The language is shared with the Nandi, Keiyo Turkana and Cherangany tribes.
Kongui Mising - Thank you.

Jambo, Dr. McLeod; I was 9 and in Mau Summit and Molo in 1952/3. I was researching Siafu when I found your site. As a fellow Kenya ex-pat and a dentist I think you'll enjoy this. My dentist is from Uganda; I had been grinding my teeth, and one day he asked me if I had ever had a night guard. I replied yes; he was tall and black, and stood outside under a cedar tree all night. He laughed through the rest of my root canal!